I always had a fondness for the adaptation of Stephen King’s The Mangler, a strange film about a possessed laundry-folding machine, so I took a chance to revisit the film this year in honor of Stephen King’s birthday. In hindsight, I wish I had kept this one buried in my memory. 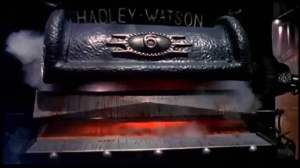 The laundry press at Gartley’s Blue Ribbon Laundry service has been acting funky. First of all, a woman named Sherry, niece to owner Bill Gartley (Robert Englund, A Nightmare on Elm Street, Nightworld: Door of Hell), cuts her finger on a lever, and later that same day, the machine goes haywire and traps Mrs. Frawley, an older worker, in its safety shield, dragging her through the machine, crushing her body in the process. John Hunton (Ted Levine, The Silence of the Lambs, Jurassic World: Fallen Kingdom) and his brother-in-law Mark (Daniel Matmor, Hit It, A Dark Truth) are on the case, investigating the accident, but what they discover is more horrifying than any normal work-related problem. The laundry press is possessed by a demon, and it’s out for more blood.

The Mangler is not a good movie, and at 106 minutes, it’s quite a slog of a movie. This was one difficult sit-through that I did not remember or expect. I recall more recently reading the short story from King, and the added mythology and plot in this adaptation don’t add much of merit to the film. In fact, having really liked King’s story, which, like so many, offered an EC comics or Twilight Zone-style to them, would have made a great movie in the right hands, but it seems now that Tobe Hooper (The Texas Chainsaw Massacre, Poltergeist) was not the right person for this job. There’s so many strange changes made to the story that benefit neither the adaptation nor the overall feeling and tone of the movie.

Robert Englund is horribly miscast, appearing almost like a version of Freddy Krueger that had survived to old age. He brings a nose-twisting grossness and annoyance to Gartley, but then you have Levine, who struggles with some of the more cringe-worthy dialogue here (he starts swearing at a possessed ice box as one point in an absurdly laughable moment taking itself too seriously).

There are several times in the film that something interesting comes up, and it almost seems that Hooper is righting the ship, only for it to devolve into a wholly unlikable mess. I really liked the setting mostly being placed at the Blue Ribbon Laundry, and I think the setting is hyper-unclean in a way that I would have been able to believe. I really like the production design and the overall look of the laundry press. I even kind of the dug the finale, though it has aged very poorly, but even after all that, the film sort of limbers on past the point of my minor enjoyment.

The Mangler was advertised as the product of King, Hooper, and Englund, three horror geniuses, but I doubt anyone involved in this film would have been happy to have their name associated in such a way, especially King, who wrote a solid if somewhat absurd short story but had no hand in the film. This is one of those adaptations I would caution even King fans to shy away from. You have better things to be doing…like the laundry, for example.

For my review of Tobe Hooper’s Eaten Alive, click here.

For my review of Tobe Hooper’s Salem’s Lot, click here.

For my review of Tobe Hooper’s Poltergeist, click here.

For my review of Tobe Hooper and John Carpenter’s Body Bags, click here.