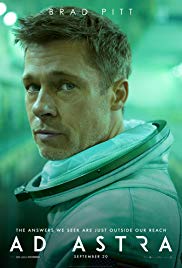 122 mins. Rated PG-13 for some violence and bloody images, and for brief strong language.

Ad Astra is the story of Roy McBride (Pitt), astronaut and son to the famous H. Clifford McBride (Tommy Lee Jones, The Fugitive, Just Getting Started), who disappeared on a secretive interstellar expedition some 30 years ago. Now, in the near future, Earth has been ravaged by a series of power surges believed to be caused by Cliff’s secret experiment, The Lima Project. Roy has been tasked with traveling to Mars to deliver a message to space, hopefully reaching his possibly still living father, in order to put an end to the power surges before they threaten the entire solar system.

I admire the idea of taking Heart of Darkness and moving it into the sci-fi genre. It worked so well as a war film when Francis Ford Coppola turned it into Apocalypse Now. The problem for me came out of an unimpressive shell for this film. I don’t think we got enough insight into The Lima Project or The Surge or many of the science fiction elements that would have enriched this telling of the classic story. The film kept being marketed as the closest thing to actual space travel, but then I kept getting hung up on the sound work every time there was an explosion. The film looked gorgeous, but my investment was wavering throughout.

Brad Pitt is incredible as Roy, giving a subtle but impressive performance as a man who hasn’t taken much care in his world as he sinks himself into his work, ignoring all outside relationships and distractions. The whole film is carried by Pitt as no other character is given much screen time to match him. In fact, Pitt’s performance is so internalized that he doesn’t even look like he’s acting at all. I liken his work here to another space film from last year, First Man with Ryan Gosling. Comparing this subtle work to Pitt’s other major film this year, Once Upon a Time in Hollywood, just goes to show that this is an actor who really can do it all.

There’s a lot to really love about Ad Astra. I think, from a technical view, everything is seemingly executed quite well, but I just wasn’t drawn in by the story in the way I wanted to. It’s magnificently shot and the score is impactful and deep. The effects were strong, but the story just didn’t take me. Still, I would recommend you checking it out if you’re a fan of sci-fi, as this contemplative opera showcases another incredible performance from Brad Pitt.