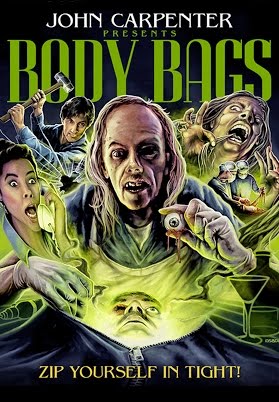 Body Bags was to be the pilot episode of a series on Showtime to rival Tales from the Crypt. At some point during production, Showtime pulled the plug, leaving us with thoughts of what might have been. So was Body Bags not worth the time? I checked it out. 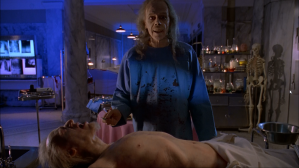 Body Bags is another anthology film, this one from John Carpenter (Halloween, The Ward) and Tobe Hooper (The Texas Chainsaw Massacre, Poltergeist). It features three stories with wraparound introductions from a Coroner played by Carpenter in heavy makeup. The Coroner is showing us how the bodies ended up in his morgue. The first story, “The Gas Station,” is a classic small set horror story that you might find in a pulp magazine about a young woman by herself running an overnight gas station and a killer stalking her. The second story, “Hair,” features Stacy Keach (American History X, Cell) as a balding man named Richard who wants more than anything to have thick lustrous locks, and he’s willing to sacrifice anything to get it. The final story, “Eye,” features baseball player Brent Matthews (Mark Hamill, Star Wars: Episode IV – A New Hope, Bunyan and Babe) who loses an eye in a car accident and gets a transplant, but the eye he gets isn’t the one he wants.

We’ve talked a lot about anthologies this month, and, as before, I’ll say it again: anthologies can be hit or miss. That being said, Body Bags is so much fun, the flaws hide behind the flavor. Having cameos from tons of other horror aficionados like Wes Craven and Roger Corman, Body Bags is a lot like desert for horror fans. It’s sweet and enjoyable and you can never have enough. I personally think the first story is the best one and it’s very simple, and Robert Carradine (Django Unchained, Tooth and Nail) is exemplary in it. The second and third stories are only flawed in that they are rather similar to each other. The framing device, though, is quite fun as John Carpenter just kind of lets loose and has fun in a very Cryptkeeper-esque role. 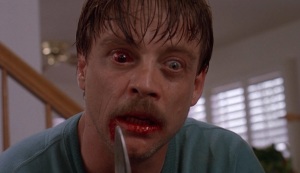 If anthologies and horror are your thing, then I highly recommend Body Bags. It’s not a film that pops up often and it isn’t always easy to find (I was able to hunt it down on my Roku for free, though), but if you can get a copy, I think you’ll be happy you did. It’s rare to see someone like Mark Hamill get to really flex some insanity, and that alone is worth the price of admission.

For my review of John Carpenter’s Halloween, click here.

For my review of John Carpenter’s The Thing, click here.

For my review of John Carpenter’s In the Mouth of Madness, click here.

For my review of Tobe Hooper’s Salem’s Lot, click here.

For my review of Tobe Hooper’s Poltergeist, click here.