Zac Efron has reboot fever. In addition to joining Disney’s new take on Three Men and a Baby, Efron has also just joined Blumhouse’s new take on Firestarter, based on the novel by Stephen King.

Deadline is reporting that the new film, written by Scott Teems (Halloween Kills, TV’s Rectify) and directed by Keith Thomas, will be produced by Akiva Goldsman and Jason Blum, who teamed up previously for the Paranormal Activity franchise. There’s no notice in the report about the role that Efron would play, but it seems likely that the role will be that of Andrew McGee.

King’s novel features a pyrokinetic little girl and her father on the run from a secret government agency who wish to use her abilities for military and other bizarre purposes. It was previously adapted in 1984 starring Drew Barrymore as Charlie McGee and David Keith as her father, Andrew McGee. That film received a sequel miniseries, Firestarter: Rekindled, in 2002.

It’s been some years since I last read King’s novel, and as I’ve said before, no studios care if you’ve read the book, but I have, so I’ll try to give it the thought. When I think back on Firestarter, I know that Andrew McGee was always cast on the younger side in the book as well, and I could conceivably see Efron as a young father protecting his nine-year-old daughter. I think it’s just that Efron has seemingly always played younger than his age that gives the notion that he’s still a High School Musical-type. I could definitely see him adding the warmth of a father who has no idea what to do in the scope of protecting his dangerous daughter from the clutches of an insidious government organization.

It all comes down to the casting of Charlie, and the chemistry between the two. There’s also a number of meaty roles from the antagonist side of things, but knowing only the initial casting of Efron (and the presumed role of Andrew), things are looking very good so far.

Now, what do you think? Do you like Zac Efron for Firestarter? Are you a fan of his previous work? Let me know/Drop a comment down below.

Firestarter does not currently have a release date. 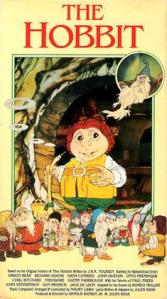 It’s still interesting to me to hear that most film fans, even fans of the Peter Jackson films or the J.R.R. Tolkien novels, are unaware that they were previously adapted: The Lord of the Rings into two animated films of drastically different tones in The Lord of the Rings and The Return of the King, and The Hobbit into the film we are going to talk about today. I’m not talking about short films or student films or experimental pieces like Leonard Nimoy’s Bilbo Baggins song (it exists). No, it’s a TV movie released in the 1970s from those guys that made all your favorite Christmas specials, but now, over 40 years later, there’s are some interesting comparisons and contrasts to Jackson’s films. They are uniquely opposite interpretations in execution and finished product, but these older, almost forgotten takes on Middle Earth still carry a lot of weight.

You know the story, but I’ll remind you again. In the Shire, there lives a comfortable enough Hobbit named Bilbo Baggins (Orson Bean, Being John Malkovitch, InnerSpace) who is rather happy with his cozy uneventful existence, as many Hobbits are, and he is looking for no reason to change it. Everything changes, though, when he is visited by a wizard, Gandalf the Grey (John Huston, The Treasure of the Sierra Madre, Chinatown), who enlists his burglary skills (of which he has none) to help Thorin Oakenshield (Hans Conreid, Peter Pan, The 5,000 Fingers of Dr. T) and his band of dwarves to reclaim their home and their dwarven treasure from the villainous and greedy dragon, Smaug (Richard Boone, Vicki, Hombre). Along this journey, Bilbo will encounter trolls, goblins, and a frightening creature by the name of Gollum (Theodore, The ‘Burbs, Nocturna) who carries a nifty magic ring. 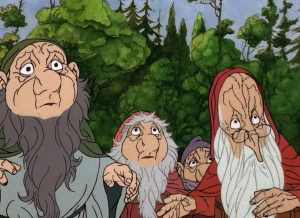 The first noticeable difference between this film and Jackson’s trilogy is just that. One is a film running just under 80 minutes, and the other is a three-part film series that comes in (extended cuts and all) at just over nine hours! For many people, Jackson’s Hobbit films are bloated and stuffed with pieces that were unnecessary. They believe that the films are simply too long and undeserving of a full trilogy of films to tell their story. To that extreme, I’ll throw back The Hobbit 1977, a film that I believe loses a lot of its grandness in swiftly running through events like a checklist. This Hobbit interpretation is too short. I personally like the heft of Jackson’s trilogy (yes, flawed as they are, if I enjoy a world, I could live there forever), but I will attest that neither adaptation perfected the length of their story to match Tolkien’s. 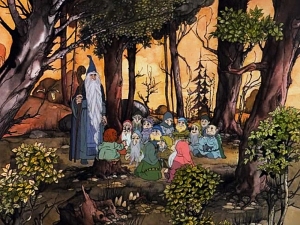 There’s also the animation aspect. I’ve always preferred live-action, but the Rankin/Bass animation of this version is rather endearing and warm. There’s a certain charm to the animation style of The Hobbit (though I also prefer Bakshi’s batshit crazy Lord of the Rings animation style), and it works to better effect here than in The Return of the King.

I like the voice cast of our central players. Orson Bean is a positively inspired choice for Bilbo Baggins, and John Huston’s take on Gandalf works wonders (it’s also different enough from Ian McKellan’s take on the character to allow both versions to flourish nicely). The consistently unusual performer Theodore does fine work as Gollum in a role that I wouldn’t have thought to work from a performance angle. I’m just not a fan of the flat characterizations of the company of dwarves. Don Messick (The Last Unicorn, Pufnstuf) and Jack DeLeon (Temptress, Allyson is Watching) voice most of the dwarves and we just don’t get much time to care that they’re on the journey with us. It asks the question of why we care about anyone else on the journey except for Bilbo, Thorin, and Gandalf. Not enough time is delegated to any of the secondary dwarves in this adaptation, but they are there anyway because that’s how the book did it. I understand as well that the book didn’t always give a lot of attention to the secondary dwarves, but if you can’t make them compelling characters, just don’t put them in the movie. It’s an adaptation, not a translation. 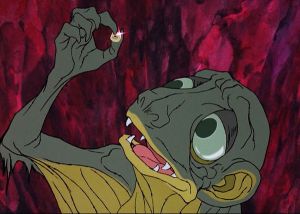 Among all that, I still quite liked The Hobbit. It’s a good family-based version of events, and without the Jackson films to compare with, it’s cute and warm and enjoyable. Sure, it’s a nearly forgotten take on Middle Earth, but I find that I keep coming back to it, flaws and all, and enjoying myself. I think you could too.

For my review of Ralph Bakshi’s The Lord of the Rings, click here.

For my review of Jules Bass and Arthur Rankin, Jr.’s The Return of the King, click here. 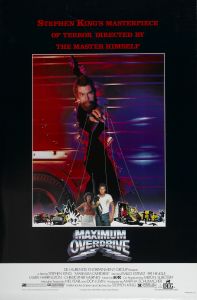 The trailer for Maximum Overdrive, perhaps the single greatest trailer in cinema history, features Stephen King, the writer/director of the film and writer of the short story Trucks, which the film is based on, claims that if you want Stephen King done right, sometimes you have to do it yourself. He also claims that he’s going to Scare the Hell out of you! Neither of these claims ever comes true in Maximum Overdrive, but is the film without merit? I don’t think so. Let’s break down the horror novelist’s lone directing credit today, and we’ll find out just what the hell happened. 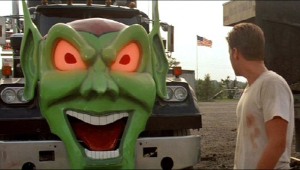 The date is June 19, 1987, and the Earth has passed in the tail of a comet that creates a supernatural force, bringing all machines on Earth to life. The machines begin a hostile and homicidal takeover, and a group of survivors hold up in the Dixie Boy truck stop gas station, hoping to fend off the mechanical menace.

Let’s start off with King’s second claim. There’s nothing in Maximum Overdrive even remotely terrifying outside of its central concept. It just doesn’t offer chills. Perhaps it’s because we don’t care about our core group of characters, perhaps it’s because we aren’t presented with enough tension once the initial plot comes into play and the survivors are trapped at the Dixie Boy. It isn’t exactly clear where the film falls apart because it is only tenuously held together to begin with. King’s a hell of a novelist, but directing just doesn’t seem his forte. He can direct on the page, but not all that well with a camera. That’s not entirely on him, as he was quoted as saying that he was “coked out of my mind” for the entirety of the filmmaking process, and it shows (perhaps nowhere more obviously than that trailer). If there’s ever been a solid case for quitting drugs, show someone the great modern horror writer and his film only directing film, Maximum Overdrive.

None of the performances are particularly dazzling. I like the Emilio Estevez (The Way, D3: The Mighty Ducks), specifically in Repo Man, but he capture the audience well. Pat Hingle (Batman, Hang ‘Em High) is flatly asshole-like in his work as Hendershot, a secondary antagonist to the survivor group, and everyone else in the film falls into the stock character work, with most of the secondary cast disappearing from memory with hours of seeing the film.

AC/DC provided the music for the film, and their song choices kind of worked with the high-octane motor vehicle villains that circulate around the Dixie Boy looking to pick off our blood-pumping heroes. I’m not big on their ratchety score outside of the song choices though. Again, AC/DC are not writers of musical scores, and while some musicians can do both, perhaps they were not ready at that time to move into the realm of films.

So the film is bad, there’s no denying that (King himself called it his worst adaptation back in 2013, and those 2 Golden Raspberry noms didn’t give it much credibility), but is it a so-bad-it’s-good kind of film? In some ways, it really is. It has such a simple plot that you don’t have to follow it with detailed notes, the inconsistencies (why do some of the working vehicles never come to life when others do?) are almost endearing, and the murder and mayhem are enjoyably silly and entertaining (King’s cameo as a man at an ATM is particularly dumb and fun). Sure, I showed it at a movie night a few years back, and it earned the enjoyment factor raised.

Maximum Overdrive is not a good movie, but like all auto wrecks, there’s some salvaging to do with this one. There are parts that work well enough to get it moving, and you can get some mileage out of it in the right circumstances, as long as you know what movie you are watching. The statements in the trailer may not be truthful, but it does sell exactly what this movie is, if you can handle it. It’s not good, and I won’t claim that it is, but you can still have a hoot with it.