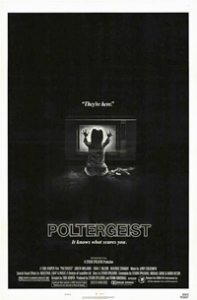 Poltergeist is an interesting film. It is equal parts comedic and utterly chilling, and not without an ounce of controversy.

From director Tobe Hooper (The Texas Chainsaw Massacre, Mortuary) comes Poltergeist, a tale of the Freelings: Diane (JoBeth Williams, Kramer vs. Kramer, The Big Year) and Steve (Craig T. Nelson, TV’s Parenthood, The Incredibles). Their new home has been having some issues…issues like a living tree and clown doll trying to kidnap their son,  a closet that warps daughter Carol Anne (Heather O’Rourke) into some purgatorial dimension, and chairs that slide across the floor. You know, normal new house problems. When Carol Anne is lost somewhere in the house, the Freelings must join together with paranormal researchers to save the young girl.

JoBeth Williams and Craig T. Nelson command their roles with precision and chemistry as the chief parental units. In fact, the relationships of the entire Freeling clan are what holds this family and the entire film together. If you don’t feel for the family, you don’t feel for the film, and thankfully, this family works. Director Hooper commands a completely different tone for this film than previous efforts like The Texas Chainsaw Massacre and Eaten Alive, the tone being more alike Spielberg’s other 1982 work with E.T.: The Extra-Terrestrial, but more on that later…

What makes this film a classic is the practical effects. Some of them are still realistically well put together over 30 years later. A few of them are still horrifying, like the mirror dream sequence and the actual skeletons in the pool (seriously, they were real skeletons). All in all, the film is still really shocking, especially for a PG film (the PG-13 didn’t really exist at the time).

So, there was some controversy about who the real director was: Hooper or writer Steven Spielberg (A.I.: Artificial Intelligence, Close Encounters of the Third Kind)? Tonally, it looks to be Spielberg, but reports have surfaced that could go either way. Spielberg does seem like a backseat director to me, but I’m thinking Hooper myself.

Finally, let’s discuss the Curse. This film has often been considered to contain a curse much like the one that the Freelings are attached to (perhaps because of the real skeletons used during filming). Actress Dominique Dunne, who played Dana Freeling, was killed by a former boyfriend in 1982 after filming completed. Then, Heather O’Rourke, who played Carol Anne, died in 1988 after surgery to repair a bowel obstruction at the age of 12. She was filming Poltergeist III at the time.

Poltergeist, a movie with history, permanently engrained in history. While the film does run on a bit longer than it needs, and featuring one too many paranormal investigators, but still a strong horror classic. Check it out, if you haven’t already. There is a reboot/remake on the way.