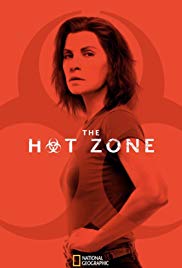 I had the pleasure of viewing a press screening for the premiere episodes of The Hot Zone, a new miniseries based on the book by Richard Preston. My wife loves the book and has read it a few times, but I knew very little about the story save that it was based on true events. Nevertheless, I was probably more excited because of how little I knew, and upon seeing the first two episodes, I really want to see the conclusion.

The year is 1989. The Ebola virus appears on U.S. soil, in close proximity to the White House, in a group of chimpanzees in a research lab. There is no known cure. Dr. Nancy Jaax (Julianna Margulies, The Upside, TV’s ER), a U.S. Army scientist, puts herself in danger in order to try and cut off the potential outbreak before it reaches the general population. 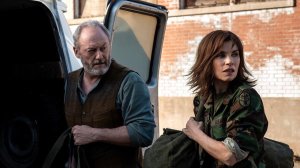 The first thing I can say about the episodes I watched is that they are generally not for the faint of heart. If you know anything about the viruses depicted in the show, then you know that there are a lot of nasty things happening to its victims. It’s not a joy to watch, but it looks incredibly real and detailed, and the mystery and danger around it is quite exciting.

For the most part, the acting works. It’s a good crew of principal performers, and Margulies does a capable job of believably keeping the focus on a threat, but there are time when she and Noah Emmerich (Super 8, Jane Got a Gun), who plays husband Jerry, feel like they missed the chemistry and, in doing so, the performances get a little wooden. It doesn’t happen a lot, but when it does, it kind of takes you out of the story.

Everyone else is mostly on par with things here, with specific attention thrown to Liam Cunningham (Hunger, TV’s Game of Thrones). Cunningham plays Wade Carter, former mentor to Nancy, who has secluded himself from this kind of work but now finds himself back in the game. Cunningham gives an intense and powerful turn as Carter, something not so surprising after his great performance in Game of Thrones.

Director Michael Uppendahl, known for his work on TV’s The Walking Dead, directs all six episodes in the miniseries, and his work in the first two is quite good. I was pretty enthralled and interested in seeing where it leads. It’s tough to see his follow-through on only a third of the work, but most of the audience at our screening was pretty captivated by his storytelling on display.

The screenplay is written with good pacing, but there are questionable choices made on the writing of Peter Jahrling’s character. Jahrling, played by Topher Grace (Spider-Man 3, Breakthrough), should be a smart man, and he is portrayed as a rather cocky man, but he does some stupid things out of fear, and I would need to find out if what happened in the miniseries with his character is completely truthful, but I feel like it was written in a way that didn’t make is arc completely believable in the series, and something should have been done to elevate it.

The Hot Zone has an engaging and exciting opening pair of episodes that should keep viewers enthralled to see its conclusion. It always feels like TV, but it’s pretty solid TV overall. The performances are mostly good most of the time, the standout being Cunningham as well as the always entertaining Nick Searcy (The Shape of Water, The Best of Enemies). It’s a gruesome story at times, but always for the sake of realism and never to extreme excess to shock the viewership. I’ll be looking forward to its conclusion. You should be looking forward, too.