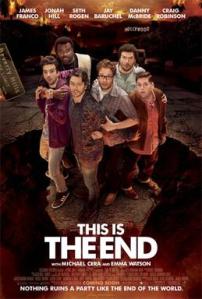 107 mins. Rated R for crude and sexual content throughout, brief graphic nudity, pervasive language, drug use and some violence.

Here we are yet again. Another year has gone by and we arrive at my favorite month: October. I love celebrating my favorite genre with you all and I’m so excited to continue the tradition. This year, I thought we’d start off a with a lighter fare and take a look at the horror-comedy This is the End. 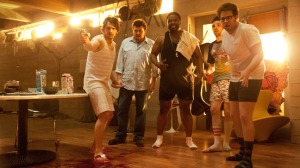 In this film from directors Seth Rogen and Evan Goldberg (The Interview), each actor portrays a fictionalized version of himself, so know that going in.

Seth Rogen is very excited to see his best friend, Jay Baruchel (TV’s Man Seeking Woman, Million Dollar Baby), who has just flown in for the weekend. As the two trade stories, get high, and play video games, Seth suggests a party over at James Franco’s (TV’s 11.22.63, 127 Hours) house. There they meet up with Seth’s other acting partners Jonah Hill (21 Jump Street, How to Train Your Dragon 2), Danny McBride (Your Highness, Aloha), Craig Robinson (Pineapple Express, Hot Tub Time Machine 2), and Michael Cera (TV’s Childrens Hospital, Scott Pilgrim vs. the World). As they party away inside, outside a cataclysmic event begins as the world ends all around them and they are forced to survive in the house as demons and death surround them, attempting to kill them all.

What a strange setup for a film, and surprisingly enough, it works better than most comedies that dip their toes into the supernatural. The film playfully uses elements and staples of a film like this such as possession, cannibalism, sin, forgiveness, insanity, paranoia, and death so carelessly (in a good way) that I can see why this offensively hilarious look at the end of days doesn’t garner as much love as other films from this cast.

I love that the cast here is able to poke fun at themselves, either playing against type (Jonah Hill and Michael Cera) or playing exaggerations of themselves (Danny McBride and James Franco). The most important part is that they respect the conceit and the material and embrace it for the comedy. 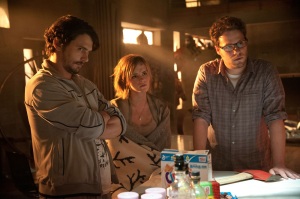 Directors Rogen and Goldberg take some big risks in the film and it pays off gloriously. It isn’t a slight on the these kinds of movies but an homage to them and a critique of fame in today’s society. And it’s really freaking funny. The cameos alone make this film a worthy comedic gem, but the way the movie is structured give it something wholly unique: a style like no other. See this movie before the apocalypse actually happens.

For my review of Seth Rogen and Evan Goldberg’s The Interview, click here.