From 1987 to 1989, four horror films were released featuring killers who come back after dying in the electric chair. This was the last. 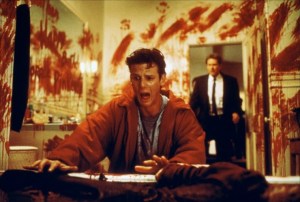 Brutal serial killer Horace Pinker (Basic Instinct, TV’s The X-Files) has been apprehended and is sentenced to death via electrocution, but on the fateful day, electrical issues and strange rituals combine to produce a hell of an accident, though Pinker still fries. Now, Jonathan Parker (Peter Berg, Very Bad Things, Mile 22), a young man who was able to assist in the capture of Pinker, discovers the murderer to be very much still active, living on as an electrical current able to inhabit other humans and use their bodies for vengeance. The only skill Jonathan has is in the form of strange visions accompanied by the ghostly visage of his dead girlfriend. Now, Jonathan will have to man up and stop Pinker from continuing his murderous rampage, or it’s lights out for him…

I’ve spoken about this before, but I firmly believe that Wes Craven (A Nightmare on Elm Street, Scream) was a great director. That’s not exactly a hot take or anything, so here’s one: I don’t think he was a very good writer. Sure, he wrote some amazing work. He was great with ideas in the same way that George Lucas is. I just don’t think he really was able to get those ideas to work on the page. That’s not a slight or anything, but look at a film like Shocker, which has some really cool ideas but the story is a bit of a mess. There’s all these random things happening in the screenplay that are never followed up on. Why does Jonathan have visions of Horace? How exactly do they work? Why do all of his friends and his coach immediately believe his batshit theory? Why does his dead girlfriend keep coming back to help him? What exactly did Horace do to come back from the dead? He’s seen performing some sort of ritual, but we never hear about it afterward.

Beyond all that, the film is far too similar to A Nightmare on Elm Street. There are elements of dreaming and nightmares and dreamscapes in the film that feel a little too familiar. For the most part, these elements just made me wish I was watching Nightmare instead. Both Nightmare and Shocker have similar opening titles, disbelieving fathers, and power through dreams.

Mitch Pileggi is batshit as Horace Pinker. He’s all the parts of Freddy Krueger that became more prominent in the later sequels, especially the attempts at humor. I like how visceral he is, how brutish, but he just didn’t work in the way I hoped he would.

Speaking of batshit crazy, let’s talk about the television scene. It’s near to the end of the film, where Jonathan and Horace end up in a television set and are fighting across the different channels. It sounds cooler than the finished product, but it kind of fails where the fight sequence in They Live succeeds. 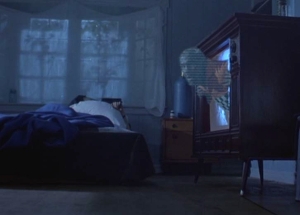 For my review of Wes Craven’s A Nightmare on Elm Street, click here.

For my review of Wes Craven’s Vampire in Brooklyn, click here.