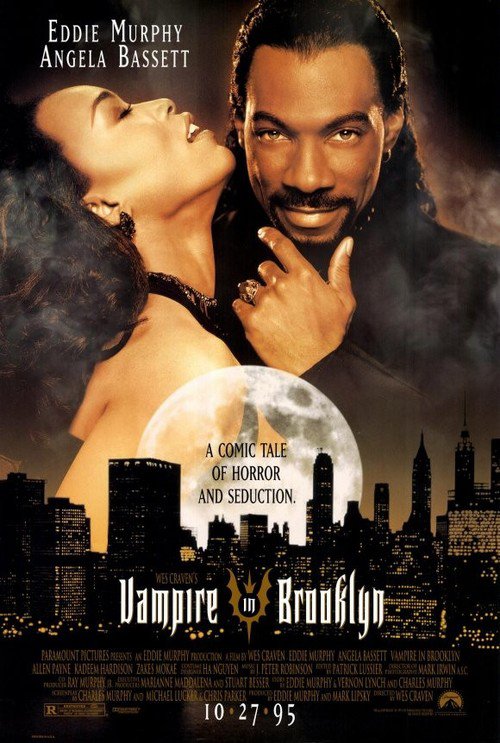 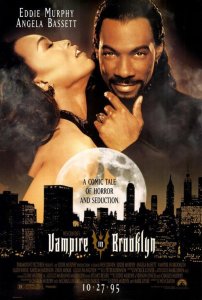 Many horror directors attempt to cross with comedy at some point, and for me, there are two infamous examples of note: John Carpenter’s Memoirs of an Invisible Man and Wes Craven’s Vampire in Brooklyn. I actually really enjoyed Carpenter’s film, and when I originally saw Vampire in Brooklyn several years back, I liked it too. Sadly, on my most recent viewing, my opinion has shifted drastically. 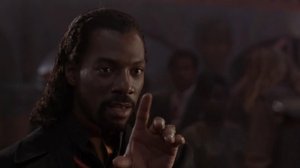 Maximillian (Eddie Murphy, Beverly Hills Cop, A Thousand Words) is the last of a line of vampires from the Caribbean. In order to save his bloodline, he needs to find a female born from a native vampire he knew. Detective Rita Veder (Angela Bassett, TV’s American Horror Story, Meet the Robinsons) is that woman, working for the NYPD in Brooklyn. After siring Julius Jones (Kadeem Hardison, White Men Can’t Jump, Made of Honor) to be his personal servant, Maximillian sets out to find his destined love in the urban jungle.

Wes Craven (Scream, A Nightmare on Elm Street) and Eddie Murphy famously fought on set about the tone of the film, and it is the paramount reason why this movie failed so much. Craven wanted a horror film with comedic elements, and Murphy wanted a comedy with horror elements. The clash was the downfall of the film.

Murphy’s Maximillian didn’t have great voicework, and the choice to do his signature multiple roles thing by playing a few other characters that Maximillian disguises himself as didn’t work nearly as well on second viewing.

Craven’s abilities as a director were really called into question during the making of this film, and his work suffered tremendously from studio interference and the uneasy set. It’s sad, because the overall idea seems like a lot of fun. I really like Kadeem Hardison’s portrayal of the decrepit Julius Jones.

I also don’t think the casting of Bassett works in the film. She has the ability to act, but this just isn’t the movie for her.

I’m happy to see that Craven was able to recover from a film like Vampire in Brooklyn with solid works like Scream and Red Eye, but Eddie Murphy, who blamed everyone else for making a film he knowingly wrote and acted in disappoints me. He claimed that he only did the film was so that he could finish his contract with the studio and focus on other works. I call bullshit, Eddie. You failed but you couldn’t just accept it.