or “A less-comedic version of Collateral”

93 mins. Rated R for violence and language throughout, some sexual references and brief graphic nudity.

Yeah, I finally caught Stuber. I was invited to numerous press screenings for this film for months and something always came up. Then, I was available to go to one, and for some reason, I just didn’t. After having seen it, I understand Past Kyle’s decision.

LAPD detective Vic Manning (Dave Bautista, Guardians of the Galaxy, Escape Plan: The Extractors) has just learned that drug lord Oka Tedjo (Iko Uwais, The Raid 2, Mile 22) is planning on doing a drop, but he’s just finished with laser eye surgery and cannot drive. He enlists Uber driver Stu (Kumail Nanjiani, The Big Sick, Men in Black: International) to drive him around the city as he hunts for clues as to Tedjo’s whereabouts. The two quickly learn that they are nothing alike, and Stu desperately wants out of this situation, something that Manning is not willing to do. Shenanigans ensue.

There’s some suspension of disbelief in the action of Stuber, and in comedy, that’s something that can actually work, but the comedy needs to be there to heighten the surreal world, and that’s unfortunately something that Stuber is painfully low on. The only good laughable moments come from Nanjiani, and many of them are featured in the trailer, so you can save yourself about 90 minutes by just watching that. Nanjiani has great comedic timing, and he’s doing his best, but there’s a lot of time in Stuber wasted on funny scenes that aren’t funny and action scenes that aren’t enthralling.

Bautista is trying his best with the screenplay as well, but he doesn’t have the comedic training of Nanjiani nor does he have the acting chops to play ball here. At least not yet. I’ve been very impressed with Dave Bautista’s work in the MCU and Blade Runner 2049 and Spectre, but he’s just not working with a director that can pull that performance from him and he’s holding a lot of this film on his shoulders. They’re big shoulders, but he’s just not ready to do that yet. He’ll get there, but it isn’t in this film.

Stuber has an interesting premise, one that seems topical and could be mined for some great comedy and action, almost like a Lethal Weapon-type buddy-cop film. That’s what I was hoping for, but it just didn’t work. The writing isn’t clever, and the story was very simple (most of the “twists and turns” were easy to see coming or nonsensical), and there’s no flare to the film. It’s very one-note. 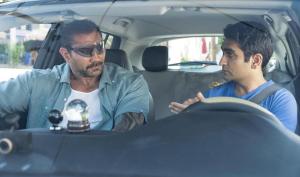 Stuber is, sadly, not good enough for its premise and doesn’t make good use of its leads. It’s a film that fundamentally doesn’t work very well and every funny moment was in the three-minute trailers. I really wanted to like it, and it just didn’t follow-through on its premise. This is one to skip.