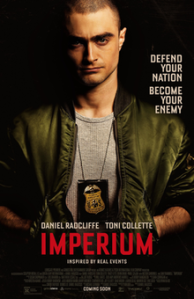 I’ve been really digging on Daniel Radcliffe’s career since he finished his work on the Harry Potter franchise (I was a fan of that series as well, of course).  He’s done blockbuster work with Now You See Me 2, he’s been on the horror side of things with The Woman in Black and Horns, and he’s embraced his strange with Swiss Army Man. Now, the first trailer for Radcliffe’s newest film, Imperium, has dropped, and it’s a realy doozy.

In the trailer, we get to see Radcliffe’s Nate Foster as he goes undercover with a group of Neo-Nazis in an effort to thwart a terror attack. I’ll leave the trailer below, so check it out!

Personally, I embrace the choices Radcliffe has been making. With films like Swiss Army Man and Horns, he’s proven that he is no longer a child, and Imperium seems like another step in that direction. I’m really excited to see where this story takes me. A few colleagues have complained that the trailer shows too much, but I actually disagree on this one.

In any case, take a look at the trailer and let me know your thoughts. Are you excited to see Imperium? Which of Radcliffe’s post-Harry Potter roles has been your favorite? Let me know!