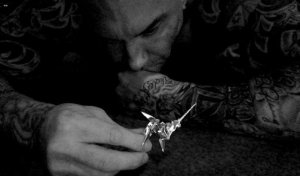 Some interesting news this morning, as professional wrestler turned actor Dave Bautista, who has already left his mark on 2 major franchises with Guardians of the Galaxy and Spectre, joining the upcoming Blade Runner sequel.

Bautista announced his addition in a very cool way, taking to Instagram to reveal a very interesting picture from one of the film’s most iconic moments. It definitely appears like he’s very excited to be making his mark again, and from what I’ve seen, this is a performer that gets genuinely excited to be taking part in his roles, so good for him. He isn’t going to win Oscars anytime soon, but his abilities are getting better in each role.

Details are still scarce about the plot and Bautista’s role in it, but the film is currently building steam with each new announcement.

Are you excited to see Blade Runner 2? And what long-gestating sequels have you been a fan of? Let me know!

Blade Runner 2 holds strong to a January opening when it lands in theaters January 12, 2018.