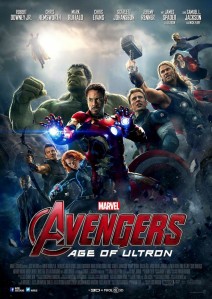 141 mins. Rated PG-13 for intense sequences of sci-fi action, violence and destruction, and for some suggestive content.

2012’s The Avengers was something of an anomaly. A film which combined several superhero franchises into one mega-franchise shared universe successfully…that doesn’t happen. But with writer/director Joss Whedon (TV’s Buffy the Vampire Slayer, Much Ado About Nothing) at the helm, it did. And it was good. Billion-dollars good. It jumpstarted Phase 2 of the Marvel Cinematic Universe and continued a winning franchise for years to come. Now, we see if the official sequel, Avengers: Age of Ultron, can continue that tradition.

The Avengers have been looking for an end to the villains before they start. When billionaire genius Tony Stark (Robert Downey Jr., The Judge, Chef) and Bruce Banner (Mark Ruffalo, Shutter Island, The Normal Heart) create Ultron (James Spader, TV’s Boston Legal, Lincoln), an artificially intelligent being created to be Earth’s mightiest defense system, but Ultron quickly realizes that the biggest threats to the world are humans and decides to do away with them. Now, the Avengers must assemble to defeat Ultron, who has allied himself with two very special twins: Pietro (Aaron Taylor-Johnson, Kick-Ass, Godzilla) and Wanda Maximoff (Elizabeth Olsen, Martha May Marcy Marlene, Oldboy).

Avengers: Age of Ultron had a bunch of set-ups. The biggest flaw comes from realizing that it has very little payoff. The entire film felt like its function was to tie up the loose ends of Phase 2 and start unpacking the storylines to Phase 3. Was it entertaining? Mostly, yes. But was it good? I really don’t know. I liked a lot of this film but I was scratching my head at times wondering why certain events were kept in the film while so many other moments were kept out. The film has Whedon’s classic dialogue, and its characters are further fleshed out, but the film felt like too many puzzles pieces from too many different puzzles that just won’t fit together.

As far as performances go, the films newcomers are pretty great additions to the shared universe, specifically James Spader’s menacing Ultron and the Vision, played by Paul Bettany (A Beautiful Mind, Mortdecai) in a new role. The film also features a plethora of previously introduced characters back in the fray, like James Rhodes (Don Cheadle, TV’s House of Lies, Crash) and Sam Wilson (Anthony Mackie, Million Dollar Baby, Black or White). The returning Avengers cast have all grown closer and you can feel the comradery when needed. The Hulk and Black Widow (Scarlett Johansson, Lost in Translation, Lucy) in particular have grown much closer since we last saw them together.

There are some particularly great sequences here, such as the moment when we are introduced to mind control due to Wanda’s abilities. We get a chance to dive into these characters’ psyches a bit further Joss Whedon even plays with our expectations that this film is going to be exactly like the previous film, opting to give more important screen time to Clint Barton (Jeremy Renner, The Hurt Locker, Kill the Messenger). We also get our first look at Hulkbuster (named Project Veronica, as a play on Betty & Veronica, the Betty being Bruce’s previous love interest from The Incredible Hulk).

Avengers: Age of Utron is the first Marvel film that absolutely cries out for an extended cut. There is just too much missing here, and its noticeable. There are numerous plot threads that don’t get the resolution they need. The film is explosively entertaining, but perhaps the most noticeably flawed Marvel film yet.

So what did you think of Avengers: Age of Ultron? Did it assemble a perfect viewing experience or leave you wanting a different Vision of the superhero team? Let me know!

For my review of Jon Favreau’s Iron Man, click here.

For my review of Louis Leterrier’s The Incredible Hulk, click here.

For my review of James Gunn’s Guardians of the Galaxy, click here.