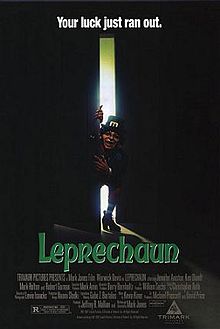 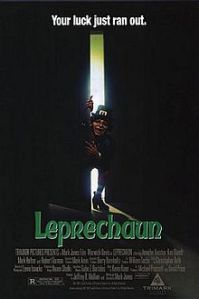 It’s tough to place a film like Leprechaun. In one way, it’s far too childish to be scary. On another, there’s too much gore and horror for it to be a kid’s movie. So what exactly is it? 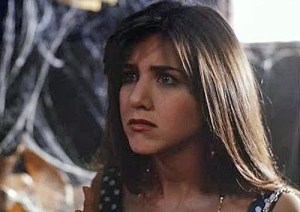 Well, Leprechaun is a bit of an enigma. It’s the story of an evil little leprechaun (Warwick Davis, Harry Potter and the Deathly Hallows: Part 2, Jack the Giant Slayer) who has his gold taken away from him and is willing to stop at nothing until he gets every piece of it back. The leprechaun is eventually trapped in a crate for several years until Tory Reding (Jennifer Aniston, TV’s Friends, We’re the Millers) and her father move in. Once he is free, he goes on a murderous rampage to get his gold back.

This film is stupid. Really stupid. It suffers from genre confusion. The original idea was for a scary kid’s movie which eventually evolved, thanks to studio heads, into a comedic yet more adult horror film, though it still doesn’t fit into either category. I find it tough to blame writer/director Mark Jones (Scorned, Rumpelstiltskin) as I’m sure he had little measure of success once his film was tampered with, but even so, the acting is horrid. Jennifer Aniston has never been an actress of particular depth, and I’ve never been truly impressed by her worth, and her first starring role is no exception. She is given a band of merry men who turn in wretched work and the entire film falls to Warwick Davis’ portrayal of the evil leprechaun. Now, Davis does fine work with this ultimately not scary role, but he just isn’t scary at all.

That’s what boggle me about this movie and, in fact, the entire series. Not one of them is scary. So why do we classify them as horror. Likely due to the gore factor, and the films do have that.

But, if there is a silver lining to this movie, and I think there is, it is that it is kind of fun to watch. This is usually my go-to for St. Paddy’s Day movies alongside The Boondock Saints and The Departed. It has a relatively odd premise played out to its lengths.

And there is that line of bad movies. Some of the Leprechaun films (I’m looking at you Leprechaun 4: In Space) are so horrid that it is tough to sit through them. On the other hand, some are just goofy enough to be fun. On that line, Leprechaun does end up on the so-bad-it’s-good side more so than the take-me-out-to-the-pasture-and-shoot-me side. So for that, I give the film its rating.