So there’s going to be a new Masters of the Universe film in a few years. With that, I figured it was time to revisit the infamous 1980s incarnation starring Dolph Lundgren (Rocky IV, Aquaman). There are a lot of films that you can revisit years later and find a silver lining to. This will not be one of those reviews. 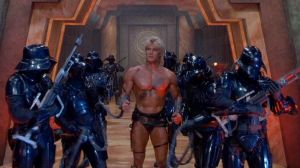 On the planet of Eternia, the villainous Skeletor (Frank Langella, Frost/Nixon, TV’s Kidding) have kidnapped the Sorceress of Castle Grayskull (Christina Pickles, The Wedding Singer, TV’s Break a Hip). He-Man (Lundgren) and his friends have a plan to save her, but when they fail to rescue the Sorceress, they escape using the Cosmic Key to a mystical place…called Earth. Now, they must recover the Key, return to Eternia, and defeat Skeletor once and for all.

This is not a good movie. It’s not good at all. Let’s start with literally the only thing that I think works in the film: Skeletor and Evil-Lyn. The two villains are pretty solid, even if they don’t get much to do. Langella is terrifically cheesy as Skeletor (his makeup effects are terrible, though) and Meg Foster (They Live, Overlord) is menacing as hell when adorned in her Evil-Lyn costume. I felt something almost Shakespearean in their portrayals, and in fact, they both site Shakespearean influences: Richard III for Langella and Lady Macbeth for Foster. While they both don’t have enough compelling dialogue or really much of anything to do in the film, I believe that they both put forth a solid amount of effort in elevating the material.

Now, onto the bad. First of all, I hate stories like this, where we take fantasy characters and remove the world, throwing them at Earth instead. Earth is boring, that’s why we go to the movies. Outside of Thor, this idea of traveling to Earth never works. It seems, for most of the film, that screenwriter David Odell (The Dark Crystal, Supergirl) knows nothing of the mythology of He-Man, and so removing Eternia from the equation makes us not have to worry about the mythology. Nothing that happens on Earth is interesting, whereas at least the stuff on Eternia has the ability to be engaging.

Then, there are distinct portions of the story that just don’t work. One of those elements is Gwildor, who replaces Orko from the source material. I just don’t understand why Orko is missing and this new incredibly annoying character has entered the mix. Gwildor is flat-out terrible.

The same can be said of this cosmic key device. Why is it necessary to the story to have the cosmic key played like a shitty synth musical instrument by everyone in the film? Why is this part of the story? It’s dumb and boring and serves no purpose.

I’d like to tell you that Dolph Lundgren plays He-Man well, but that’s not the case, and he’s the poster child for the lesson that you can look the part but you can’t always play the part. Lundgren survived most of the 1980s without any acting lessons, and if he’d taken the time to learn to perform, I think it would have served his career so much more than the brooding and the fighting.

Yes, just about everything in this film doesn’t work outside of Langella and Foster, and they’re doing their best. The studio had great faith in this film, and they had already prepped a sequel before this film under-performed. That sequel became the 1989 film Cyborg, but don’t ask me how that film was originally a Masters of the Universe sequel. This is a forgettable 80s film that should stay forgotten. Here’s hoping the new Masters of the Universe looks to this film for a case study of how not to handle the IP. Here’s hoping.