The Grudge is 15 today! Not the original one. The English one. Is that a problem?

Karen (Sarah Michelle Gellar, Cruel Intentions, TV’s Buffy the Vampire Slayer) is living in Tokyo with her boyfriend Doug (Jason Behr, Dragon Wars: D-War, TV’s Roswell) and working as a care worker. When one of her coworkers doesn’t show up, she is assigned to care for Emma Williams, an older woman suffering from lethargy and dementia. While attending to Emma, Karen discovers something strange happening in the house. She hears noises and is seeing people that aren’t supposed to be there. She begins to unravel a strange mystery involving death, pain, grief, and a grudge upon the house, one that will not leave her alone.

I didn’t like The Grudge the first several times I elected to view it, but, being that it was coming up on the 15th anniversary and the upcoming sequel, I figured it was only right to try it one more time. So what’s changed this time, if anything? Well, I will say this: the first few times I watched the film, I didn’t find a whole lot to like, but this time, I actually found the mystery and story of the film quite engaging, but all that being said, it’s still not scary whatsoever. I still find the ghosts to be almost laughable and the sound design, while being important to the story, doesn’t work. The ASMR mouth sounds and the cat sounds being uttered by the ghosts is really not scary in the slightest.

Sarah Michelle Gellar is not doing anything special, and I really wish I’d gotten to see something better from her. I’m far more interested in the police officer character who gets involved in the story, but none of the main cast is given a lot to do. Jason Behr gives a mostly monotone reading of his dialogue. Truly, just about any part of the nonlinear story structure is better than Karen’s. 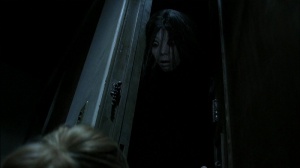 The Grudge may be fine for some, but I still didn’t think it provided enough of the thrills and excitement I was hoping for. I really want to like it, and I think that the story, the mystery, and especially the mythology is very strong in the film. The problem is that I’m just not feeling the central character arc of the film. I have to judge the film for what it is and what it wants to be. It’s just not scary, even with the same director as the original film. Go watch the original.