I won’t begin to act like I’m a genius when it comes to Star Trek. I got into the movies in high school and the show a bit more during my college experience, but I’m no expert, but I recently heard that September 8th is considered Star Trek Day (the first episode aired on 9/8/1966), so I figured we would talk about what is considered by many to be the best of the Star Trek films, The Wrath of Khan. 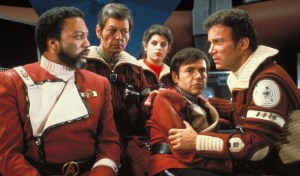 It’s been fifteen years since the crew of the starship Enterprise marooned the treacherous Khan Noonien Singh (Ricardo Montalban, Spy Kids 3-D: Game Over, The Naked Gun: From the Files of Police Squad!) on Ceti Alpha V after Khan attempted and failed at taking the ship, and now, the crew of the starship Reliant have been taken captive as Khan seeks vengeance upon the Enterprise and especially its former captain, Admiral James T. Kirk (William Shatner, Aliens Ate My Homework, Batman vs. Two-Face). Khan blames Kirk for the death of his wife. As Khan sets his trap into place, the Admiral takes control of the Enterprise once again and sets off to answer a distress call, unaware that he is about to enter a situation he has never faced with a foe he never expected to see again.

The Wrath of Khan is, to my knowledge, the first time a film in any series was made as a direct sequel to a television episode, and the first time I watched it, I had never seen Space Seed, the episode in which we are first introduced to Khan, and I would guess a great many casual fans would not know that Khan has been there before, which is a testament to director Nicholas Meyer (Vendetta, Company Business) and screenwriter Jack B. Sowards (Desperate Women, Cry Panic) in crafting a standalone story that is also enhanced by the show which came before it and the film which preceded it. It’s a captivating screenplay and story that tackles the task of saving a franchise and shepherding it into the future without forgetting the past.

This sequel also excels at the most important element in the difference between television series and movies. When you have a weekly series, especially one as episodic as Star Trek, you have your team and they go on an adventure, but by the end of the episode, most everything has turned out okay. Now, this is not always the case, but most of the time, in these procedural shows, it is. In the case of Star Trek, though, and transitioning from television to film, there’s a bigger budget, there needs to be a bigger scope, or audiences are going to question why they are dropping serious money to see something on the big screen that they should be able to see at home. So spectacle is key, something that Wrath of Khan handles quite well. The other notable change for the series is now that you have an event series with only one story every year or two, you need that story to be very important. It needs to be something that forever alters the story, and by the end of Wrath of Khan, this story has had an effect on the Enterprise and its crew.

I need to give specifically high marks to Leonard Nimoy (Transformers: Dark of the Moon, Adventures in Zambezia) as Spock, James Doohan (Skinwalker: Curse of the Shaman, The Duke) as Scotty, and Kirstie Alley (Drop Dead Gorgeous, Look Who’s Talking) as Saavik, a new recurring character in the franchise. Everyone is quite solid in the film, especially these three. Add their work to Montalban’s scene-chewing performance and you have a good recipe for excitement. I even have to say that Shatner’s work as Kirk is great here too. He doesn’t do anything really different here but he has just honed his character over his time in Star Trek to the point where he just captivates the screen.

Overall, The Wrath of Khan is a great entry point for anyone looking to get into Star Trek but finds the daunting task of three live-action seasons, two animated seasons, and a not-so-great first film. It’s filled with dazzling characters, real tension, and stunning visuals. This is a Trek film for people that don’t normally call themselves Trekkies. Seek this one out. Happy Star Trek Day!

For my review of Robert Wise’s Star Trek: The Motion Picture, click here.