135 mins. Rated R for violence/horror, bloody images, and for language.

It seemed like It was never going to get the new adaptation fans have been clamoring for. The project had Cary Joji Fukunaga and Will Poulter originally in place after several unsuccessful attempts, and then Fukunaga left the project and Poulter was replaced. Then, director Andy Muscietti (Mama) surfaced to lead the project, something I was so sure about. I liked Mama, but it was a smaller, more intimate tale, and It is a big booming horror epic. As pics started to drop from the production, I’ll admit that I was unimpressed, and it was only after seeing the film that I realized how wrong I was. 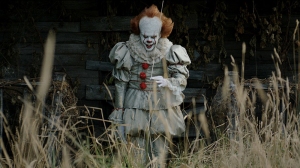 It’s the summer of 1989, and the small town of Derry has been ravaged by a string of disappearances involving children, but Bill Denbrough (Jaeden Lieberher, St. Vincent, The Book of Henry) isn’t willing to accept that his younger brother Georgie is gone, and he routinely brings his friends, Richie (Finn Wolfhard, Dog Days, TV’s Stranger Things), Eddie, and Stan, down to the Barrens, a marshy area where the sewers empty out, to look for his body. As the summer goes on, the group adds Ben (Jeremy Ray Taylor, 42, Goosebumps 2: Haunted Halloween), Beverly (Sophia Lillis, Nancy Drew and the Hidden Staircase, TV’s Sharp Objects), and Mike, and each of them is plagued by a strange manifestation they call It, a creature that regularly takes the shape of a clown named Pennywise (Bill Skarsgård, Deadpool 2, Assassination Nation).

The studio envisioned It as a two-part adaptation of the weighty tome that Stephen King wrote in the 1980s, and this film is an adaption of roughly half of the novel, which jumps back and forth in time seeing the Losers Club as children and adults returning to Derry to finish what they started. For the film, this time as children is the entire focus of the film, a move I actually believe helped the organization of the story much better than jamming the whole book in and trying to do it justice. This is a case of a two-part film that actually needs it.

Each of the kids does a tremendous job in the film at developing a character amidst all the goings on with It, with particular emphasis given to Sophia Lillis as Beverly and Finn Wolfhard as Richie. Lillis gives a nuanced and layered performance as the only female member of the Losers Club, and her collaboration with Muscietti creates a well-dimensioned girl who is dealing with a lot. Beverly was always the best character in the book, too, so it’s great to see her given justice here.

In that same way, I was surprised by how good Finn Wolfhard is as Richie. Wolfhard is of course known for Stranger Things, a series that takes a lot of influence from Stephen King and, at times, It, so I was worried that Wolfhard’s character would be too close to what we see in Stranger Things, but he plays Richie so well as such a different character. Richie is the goofball with the nasty speech and a whole lot of fear, and Finn does him justice.

All that aside, the other tough role to fill here is Pennywise. Coming off the miniseries, Tim Curry’s take on Pennywise the Dancing Clown is the best piece of the puzzle, so finding someone who can give a new take on the creepy clown is a tough sell. I was actually all for Will Poulter, and I was pretty irked when he ended up not getting the part, but Skarsgård just knocks it out of the park. He plays Pennywise with the understanding that this is just one form of It, a very old and very powerful entity, and Pennywise comes across as a favorite form but also as a skin worn by a creature. When he shows his endless rows of teeth, Pennywise’s eyes kind of slough away like they were a snakeskin coming undone. It’s a horrible-looking fantastically-performed boogeyman.

For a lengthy film like this, it’s rather forgotten how smoothly the movie runs. Every time I watch it, I don’t realize the two-hour-plus runtime moving along at a juggernaut pace. There’s so much to cover that it never gets boring. In fact, the screenplay does a solid job at adapting the spirit of the source material instead of just being a carbon-copy of the book set to film. There are major differences about the individual fears that each of the Losers Club have, and the changes are made for a variety of different wholly-understandable reasons. Some of them would’ve been very tough to put to film in a workable way, and others were of the specific time period of the novel (the Losers are in the 50s in the book), and some were cut or rearranged for timing. Now, as much as I loved the werewolf sequences of the book, I understand that the film is not the book, and it’s respectable in that way.

There is a significant flaw for me, though, and it’s this: It wasn’t scary. It pains me to say it, but I wasn’t scared at all. I really thought this would be the one to get me, but it didn’t. There’s some spooky individual moments (watch the librarian in the early scene with Ben), but overall it didn’t give me that shiver-myself-to-sleep vibe I was really hoping for. It’s still more than entertaining for its tale of childhood friendships and monsters and grief, but I just wanted it to be scary.

It is a fantastic adaptation of half of Stephen King’s source material. For a film that had some laughable early production stills, Andy Muschietti really pulled it off and I’m all the more excited for It: Chapter Two. This was a well-constructed story of friendship akin to other classics of the genre like Stand by Me, and apart from lacking in the scares for this writer, it is a wonderfully entertaining thrill-ride.