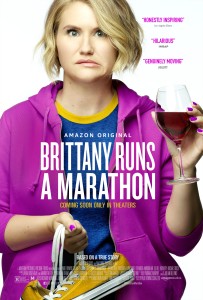 103 mins. Rated R for language throughout, sexuality and some drug material.

Brittany (Jillian Bell, 22 Jump Street, TV’s Super Mansion) is almost thirty, and she’s having trouble sleeping. Her doctor explains that it might be her weight that is causing her sleep problems, but Brittany’s lifestyle of drinking, partying, eating, and not caring probably have something to do with it as well. She realizes that she isn’t really moving forward in life and decides to finally do something about it. She wants to run a block, and that block turns into 2 miles and then a 5k. Now, Brittany sets her sights upon something bigger: the New York City Marathon. She has less than a year, but with her new running friends Catherine (Michaela Watkins, Wanderlust, Good Boys) and Seth (Micah Stock, Life Itself, TV’s Bonding), Brittany believes that she can achieve this almost impossible goal, but there’s only one problem standing in her way: herself.

Paul Downs Colaizzo’s debut film is a very tight character study loosely based on a friend, and his collaboration with Jillian Bell (who lived the character’s struggle in losing 40 pounds herself) in creating the film’s version of Brittany is terrific. Together, they crafted a wholly relatable and flawed human being who thinks she knows what will fix everything in her life. The depiction of the classic hero’s journey here is spot-on, and it’s anchored by a well-written screenplay and well-performed cast of supporting players. I particularly loved Bell’s chemistry with running friend Seth, played by relative newcomer Micah Stock.

What’s so great about the film is that each of the secondary characters has an important role in advancing Brittany’s arc and servicing the story. Brittany’s roommate Gretchen is similar to Brittany in that she seemingly has everything she wants in life but still isn’t a happy and good person. Her coworker Jern (Utkarsh Ambudkar, Pitch Perfect, TV’s Harvey Girls Forever!) is someone who has goals in life but doesn’t really move forward in them, very similar to how Brittany’s journey begins. She is faced with all these possible versions of herself throughout the film as she is forced to confront the person she wants to be.

Brittany Runs a Marathon isn’t splashy or visually stunning. It’s a character piece, and a very inspiring story that made me want to run out and sign up for a 5k (baby steps). It’s headlined by a star-making performance from Jillian Bell and an all-around well-picked supporting cast. Colaizzo’s strongest asset is his excellent character work and story structure, and it’s on full-display here. Outside of a few nitpicks throughout, Brittany Runs a Marathon comes highly recommended.