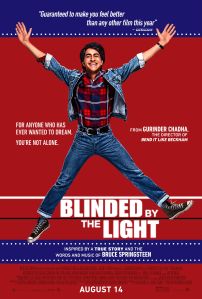 118 mins. Rated PG-13 for thematic material and language including some ethnic slurs.

I’ve been waiting on Blinded by the Light since January. As with several other films from this year, I started hearing great reception coming out of the early festivals, and as soon as I heard more about the plot and saw a trailer, I was sold on it. Coming out of the theater last night, I can absolutely understand and agree with all the good word. 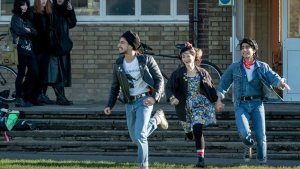 It’s 1987, and Britain is not an enjoyable home for many Pakistani people, and it’s especially apparent in the small town of Luton, where teenager Javed (Viveik Kalra, TV’s Next of Kin) is struggling to find a place in his family, his school, and his town. Then, he meets Roops (Aaron Phagura), who gives him two Bruce Springsteen tapes, and Javed’s entire world is turned upside-down. In Springsteen, he finds an inspiration to pursue his passion for writing and poetry, and he finds the confidence to talk to the cute girl in his class and stand up to his father who believes that the most important thing he can do is make money to contribute to the family, but Javed finds that he cannot turn his back on everyone who challenges him.

I really enjoyed this feel-good film. Director Gurinder Chadha (Viceroy’s House, It’s a Wonderful Afterlife) has crafted an interesting backdrop to this music-laden love-letter to The Boss. The way she juxtaposes feelings of freedom and passion with the imposing racially-charged town that Javed lives in makes for a really strong narrative. She jumps between musical-style dance numbers with Javed and Roops to more serious family conflicts between Javed and his father Malik (Kulvinder Ghir, Bend it Like Beckham, Level Up), and she does so with a keen and graceful eye.

Viveik Kalra does a great job leading the film as a mostly-newcomer performer. I connected with Javed and the layered acting from Kalra. I understand the internal conflict facing Javed about his love to write and his passion to create, but I cannot begin to understand the isolation he feels because of his nationality. The film conveys that isolation very well, though, and I think I was able to at least glimpse what it felt like.

The film’s usage of Bruce Springsteen’s music to stress Javed’s personal journey works pretty well, but I will admit it is overused at times. I think that the way to emphasize specific lyrics from the songs visually, be it swirling around Javed’s head or plastered on the walls behind him works very well, and it makes the narrative content much more accessible. It isn’t necessarily a Boss-test that makes its viewers unpack all of Bruce’s work and instead shows the audience how these two completely different people are feeling the same things. Once Springsteen’s music is introduced, it is heavily utilized, almost to a fault. I think that by trimming some of the music, the film’s pace would improve more. 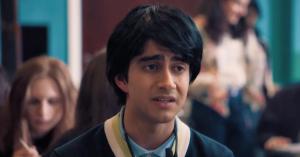 Overall, Blinded by the Light was an excellent music-based film, a story with heavy-themes that also can bring a certain level of joy can be a difficult mixture to find and maintain, but Chadha is able to convey a message and a story that is so accessible even if you’re nothing like Javed. That’s the power of Bruce’s music; it connects us, and I think our filmmaker was able to pull that out here.