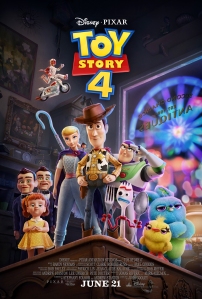 We didn’t need a Toy Story 4. That’s what I kept saying. We just didn’t need it. Toy Story 3 was a great ending to a solid trilogy and we didn’t need to muddy the waters with another installment almost destined to be terrible. We trusted Pixar not to ruin this one, and our trust in them was worth it. 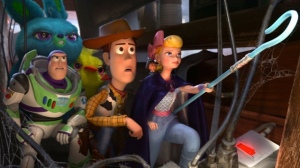 It’s been two years since Andy gave his toys over to Bonnie (Madeleine McGraw, American Sniper, Ant-Man and the Wasp) and departed for college, and the toys have been on a great many adventures since then. Andy’s favorite toy Sheriff Woody (Tom Hanks, Cast Away, The Post) is struggling, though, as he has been seemingly forgotten by Bonnie when playtime occurs, but he remains vigilant in his duties to protect her, so when she becomes nervous at kindergarten orientation and makes a new toy, Forky (Tony Hale, Batman Ninja, TV’s Arrested Development), out of some trash and crafting supplies, Woody takes it upon himself to teach Forky how to be the best toy he can be. During this time, Bonnie and her family are on a vacation in the RV, and at one of the stops, Woody spots a lamp at an antique store that he believes may belong to Bo Peep (Annie Potts, Ghostbusters, TV’s Young Sheldon), a toy that one belonged to Andy’s sister, one that he cared for very deeply. Woody and Forky also come across the menacing Gabby Gabby (Christina Hendricks, Ginger & Rosa, TV’s Good Girls), a defective antique toy who wants Woody’s voice box for her own. Now, Woody must return Forky to Bonnie without getting caught by Gabby Gabby, and he is also forced to confront his own wants in the process.

Let’s cover the purpose of Toy Story 4, because if there was one criticism in just about any fan’s mind as they enter the theater, it’s the question of WHY? Why Toy Story 4? Well, I will say this. I think Toy Story 4 is the second-best film in the series behind the third film. That being said, I think Toy Story 4’s ending is so much better than the third film. It leaves up in a very satisfying place and works very well in questioning everything that came before. It’s a film that looks at the toys we have and asks a lot of questions. 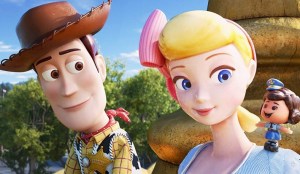 This is very much Woody’s story, and he goes on it mostly without the help of the other toys, encountering lots of new characters in the process. While Toy Story 3 is the ending of the story in relation to Andy, Toy Story 4 takes a good hard look at Woody, a toy that has always been in service of his human, but he is confronted with the very real idea that he may not be Bonnie’s favorite toy. His character arc, especially in relation to Forky’s existential crisis of self, is very well-layered and something I’ve always wanted more out of.

The new characters are so wonderful as well. Keegan-Michael Key (Keanu, TV’s Friends from College) and Jordan Peele (Captain Underpants: The First Epic Movie, TV’s The Twilight Zone) appear together as Ducky and Bunny, two sentient toys made sown-together at the hands, and they are an absolute delight. Key and Peele use the classic comedic timing and chemistry that they’ve been known for to make this the funniest of the Toy Story movies. They had me in stitches, never once ruining the scene by trying to hard. 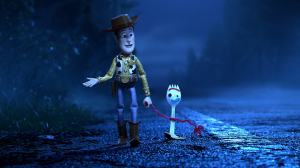 Then, there’s Duke Caboom (Keanu Reeves, The Matrix, John Wick: Chapter 3 – Parabellum), a Canadian daredevil toy with a motorcycle capable of performing incredible stunts, or at least, that’s what the commercials had said. I love all the character Reeves packed into such a limited screen time. He worked tirelessly on embodying his character with the director, and it shows in the work. His is a similar character to the one that Buzz Lightyear (Tim Allen, El Camino Christmas, TV’s Home Improvement) was in the first film: a toy that is coming to terms with its limits. He is broken on the inside because he was never able to meet the expectations of his commercial.

The only real flaw I had with Toy Story 4 is that I believe that Gabby Gabby is probably the worst villain of the entire franchise. It sounds like I may be in the minority on this one, but I’m going to speak my reasons and let them stand. I never found Gabby Gabby as a villain to be very menacing. Yes, she’s a little creepy and her henchmen ventriloquist dummies are certainly frightening and strange enough, but I never really saw her as villainous in the way that I saw, say, Lotso from Toy Story 3. Maybe it’s just me, but I felt like she was antagonistic but never villainous.

Toy Story 4 also feels, at times, like a big game of I Spy. The antique store, where a good portion of the film is set, is chock full of Easter Eggs and references to other Pixar films, to Toy Story films, and to other pop culturally iconic movies, most notably The Shining, which has always had a somewhat odd connection to the Toy Story franchise. Then, there’s voice cameos galore, many of which I didn’t catch until someone told me about them after the film ended. It’s just a celebration of so much magic that Disney and Pixar can craft. 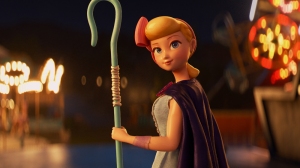 Toy Story 4 is the perfect true finale to the franchise, one I hope they actually keep to, and I absolutely adored this movie. It’s the ending that feels most earned, not just throughout this installment, but through the entire series. It’s a powerful finale that will drive many to tears, this writer included. I really enjoyed it.