102 mins. Rated R for sexuality, nudity, language and some drug use.

Gloria Bell isn’t exactly a movie for me, but I found the trailer quite intriguing. I adore Julianne Moore (The Hours, Bel Canto), but part of me will always assume a movie about aging will be terrible. After all, so many of them are, and it wouldn’t have shocked me if Gloria Bell had taken a similar track. Thank God that didn’t happen.

Gloria Bell (Moore) is an divorcee in LA who spends many a night out at the nightclubs for older ladies and gentlemen, clubs that play songs from a more youthful time in Gloria’s life. Gloria seems very unsure of herself when she meets another divorcee, Arnold (John Turturro, Barton Fink, The Big Lebowski), and is quite taken with him. As the two form a budding and affectionate relationship, though, Gloria starts to learn some strange pieces of information about Arnold and she wonders if the two have as close a connection as she is hoping for.

The film is, at its core, an emotionally powerful character piece about a woman searching for love of herself again and love for life. As I watched her in the nightclub scenes early in the film, you can see she is feeling herself in the music but not really letting loose or freeing herself up to it. She knows she loves it, and she loves a great deal of life, but after becoming single again and losing her children to their own respective journeys, Gloria is merely asking an important question: is there a point in starting over now?

This emotionally arresting character arc is made by Julianne Moore’s award-worthy portrayal. For someone like me, who may not truly understand this part of her journey as I haven’t had to experience it, I was taken in by her subtle and nuanced performance. There are layers to the way Gloria uses her line of sight in the film. I kept following Moore’s eyes as she examined the world around her, and I was enthralled by it.

The film, directed by Sebastían Lelio (A Fantastic Woman, Disobedience), remade from an earlier film of his, is a little by-the-numbers, and without a strong central cast, it may not have worked as well, but Lelio is very collaborative with his performers, and that may stand as to why the movie works. He has a vision that is palatable across languages and cultures, and he understands character, and that’s what makes Gloria Bell such an interesting character. 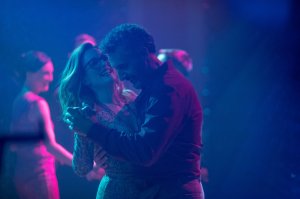 Gloria Bell works because of a director who lets his performers perform and doesn’t offer a ton of flair and a central performance that should not be underestimated. While the story is less memorable that it should be, it’s the journey of its lead that carries the audience, supported by a truly incredible cast that help Moore shine. This is worth checking out if you missed it and need a little self-love.