135 mins. Rated R for language throughout, including racial epithets, and for disturbing violent material and some sexual references.

BlacKkKlansman kind of snuck up on me. I had no idea this film was coming out. I didn’t even know Spike Lee (Do the Right Thing, Rodney King) was working on a major project. This film just kind of appeared one day. It’s one of those films that you almost can’t believe is based on a true story. This one more so than most. I had a feeling it would be an interesting film when I finally did hear about it. The shocking thing was just how damn good it was. 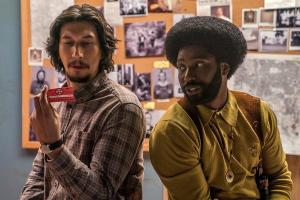 The film is the so-crazy-you-won’t-believe-it true story of Ron Stallworth (John David Washington, Monster, TV’s Ballers), the first black officer in Colorado Springs. Moving from a lowly records position to an undercover assignment, Ron ends up posing as a white supremacist. Using a “white” voice on the phone speaking with members of the KKK and another detective, Flip Zimmerman (Adam Driver, Star Wars: The Force Awakens, TV’s Girls), posing as white Ron in public, he works his way up to the top of the KKK, eventually speaking to and sharing a room with David Duke (Topher Grace, Delirium, TV’s That ’70s Show), the Grand Wizard of the Klan. Now, Ron and Flip find themselves in an interesting and dangerous arena and must do all they can to expose the local chapter of the Klan before something unthinkable happens.

I read somewhere that when Jordan Peele told Spike Lee about the project that Spike didn’t really believe it, and to be fair, it’s a hard story to believe. When Lee finally signed on, he had several important elements he wanted to infuse in the story: he wanted to heighten some of the more comedic parts of this larger-than-life story, and he wanted to make his film as relevant as possible to the current political climate. If that was his focus, he was damn successful.

There are some historical inaccuracies in the film, namely that Stallworth apparently never used a “white” voice and it was just his own. The time the film is set was slightly adjusted as well. I don’t think less on the experience because I feel like these and other changes heightened the cinematic experience and impact of the story. True stories are never 100% true even if we try real hard. 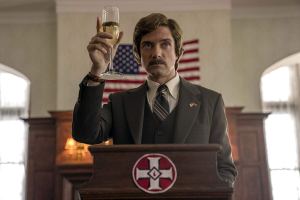 John David Washington is flat-out revelatory as Stallworth. He disappeared into the role and the two became one. I completely forgot I was watching a movie, I was so engrossed. Partnered up with Driver in a supporting role and it just melded so perfectly, but I have to mention Topher Grace’s performance. This is not something that I ever pegged him for, but his smarmy attitude and sinister calmness was haunting and strange.

When Lee decided to infuse his story with even more relevancy than it had, he found a profound connection with our current political atmosphere, one that isn’t wholly new, but it is wholly unique to the director. There are references and lines, both major and minor, that firmly plant this story in present day, even though the film is set decades ago. There is a scene where two characters cast doubt that America will ever have a white supremacist for a President and it’s almost as if both performers looked directly at the camera and audience, pausing for desired effect. It’s unsettling with a dose of comedic.

What I can tell you is that Lee’s film starts with a bang, a long speech by Alec Baldwin as the incredibly racist and hateful Dr. Kennebrew Beauregard. It also ends with a bang, one I won’t ruin for you, but I can say that when this film came to a conclusion, my jaw was hanging. I was so incredibly shocked by the ending that Lee chose to put to the film, and I think it is powerful, disturbing, and the perfect ending for this film.

Spike Lee’s BlacKkKlansman is unlike almost any film I’ve seen this or any year, and it stands as one of my favorites. It seems to fire on all cylinders, and even though the first act takes a few minutes before it really kicks into high gear, I’m merely nitpicking an incredible experience, one that I hope you’re ready for. This is maybe one of the most important films of this year or any other. See this movie.