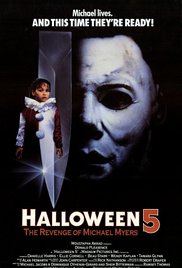 After being essentially rebooted (before it was a thing) in 1988, the Halloween franchise appeared to be going strong again. So it’s a strange happening that, in 1989, the series died again, only to be bought up six years later. So what happened? Why did Halloween 5: The Revenge of Michael Myers effectively rekill the franchise? How did this happen? Let’s take a look.

After a horrific encounter one year ago, Jamie Lloyd (Danielle Harris, Don’t Tell Mom the Babysitter’s Dead, Victor Crowley) is now mute and living in a children’s hospital. Michael Myers, however, has escaped after falling down a mine shaft and falling into a coma, where a homeless man finds him and fixes him up. When Michael awakens, though, he again goes on a murderous rampage, all the while looking for niece Jamie.

There are a lot of reasons that Halloween 5 is responsible for rekilling the franchise. First and foremost, this fifth installment is the worst one of the five thus far. There are so many mistakes made, some large, some small, and the film just stumbles through these bad decisions.

Let’s start with the elephant in the room: the addition of the Man in Black. Throughout the film, we get glimpses of a mysterious man walking through Haddonfield, searching for Michael. We never get a real answer to what he is (until the sequel was forced to), and Don Shanks, who played Michael, also did a lot of work as the Man in Black. Here’s the thing: he was told that there was a possibility that the Man in Black was a relative to Michael, but as it turns out, the producers had no idea who the Man in Black really was! Was the intention to just figure out this major plot point later? Seriously? This was something that inevitably had to fixed in the sequel (and that explanation turned a lot of fans away and rekilled the rekilled franchise again), but even for this film, having this awkward character introduction and his eventual play into the main film’s story lead to an unsatisfying ending.

The look of Michael is really odd as well. A new version of the mask was created to fit Don Shanks’s head, and it really doesn’t look good at all. In fact, it’s flat-out awful looking and cheap at that. His look was further muddled by an accident in filming where Donald Pleasance (The Great Escape, Fatal Frames) hit Don Shanks with a 2×4 and broke his nose. The mask needed to be fixed to fit over a nose bandage. This made the thing look downright ridiculous and it’s pretty noticeable throughout the finished film.

As far as the actual film goes, most of the potential victims are downright unlikable, from Tina (Wendy Kaplan, Summer Dreams: The Story of the Beach Boys, The Labyrinth), teenage friend to Jamie, to Tina’s friend Samantha (Tamara Glynn, Daddy and Them, Life on the Flipside). You kind of want them dead.

The film is directed towards these attractive teenage potential victims instead of to Loomis, Jamie, and Rachel like it should. These characters are the heart of the story and they are where the interest lies. This ridiculous subplot about a mute Jamie doesn’t work, it just kind of annoys, which I don’t blame on Danielle Harris. She just isn’t given anything to do until the very end and it doesn’t amount of much of a character arc.

Halloween 5: The Revenge of Michael Myers takes all the good will of the previous installment and shatters it. It is universally disliked as a sequel by franchise fans, and it is partly responsible for the weird direction the series had to take to justify it. This is one I don’t usually pay much mind to, and I don’t think its a place for casual viewers to go.

For my review of John Carpenter’s Halloween, click here.

For my review of Rick Rosenthal’s Halloween II, click here.

For my review of Tommy Lee Wallace’s Halloween III: Season of the Witch, click here.

For my review of Dwight H. Little’s Halloween 4: The Return of Michael Myers, click here.