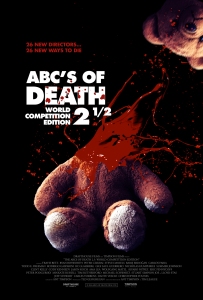 The ABCs of Death franchise is a curious one in that the first two installments are good and bad. It’s generally assumed that I won’t watch the film and enjoy the entire thing, but I’ve enjoyed a good amount of the shorts within them. ABCs of Death 2.5 is not ABCs of Death 3. In fact, ABCs of Death 2 had a contest in which filmmakers from all around were given the opportunity to submit their short film for “M is For…” and, while a winner was selected for that film, there were so many notable finalists that an entire film, ABCs of Death 2.5, was created just to showcase 26 of them, all linked around the letter M. So no, this is not the exact same as the first two, but it still kind of is.

This is probably the first ABCs of Death film in which I enjoyed more of the shorts than I didn’t. The ones of particular note were:

M is for Magnetic Tape is a wild tale about a man protecting his video store from assailants. It’s a deliciously visual short. M is for Mailbox is an interesting play on vampire mythology and, while not unique, it put a smile on my face. M is for Marauder is probably my favorite, a black-and-white play off of Mad Max but entirely on children’s tricycles. M is for Merry Christmas is a comedic short about lonely Krampus. There are many enjoyable films in this collection.

ABCs of Death 2.5 also shares some of the problems of the series in that some of the shorts seem very similar to others we’ve seem before. They seem to fall into overtly-sickening, overtly-strange, or overtly-uninspired.

I would say I enjoyed more of ABCs of Death 2.5 than the other films in this collection. I keep finding myself going back for more. This series continues to not be for everyone, but for those of you with the stomach, ABCs of Death 2.5 is worth your time for many of the great shorts within.

For my review of The ABCs of Death, click here.

For my review of ABCs of Death 2, click here.