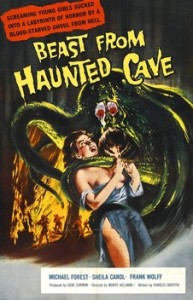 Roger Corman was, is, and always will be the king of the B-Horror film. He has directed, produced, and created some of the weirdest pulp terror stories in existence. I was looking through his catalog of work and came across Beast from Haunted Cave, a film shot and set in Deadwood and the Black Hills of South Dakota, where I went on my honeymoon earlier this year. I simply couldn’t avoid it, and I probably should have.

Beast from Haunted Cave concerns a group of criminals plotting to steal gold bars from a bank in Deadwood, led by Alexander Ward (Frank Wolff, The Great Silence, Once Upon a Time in the West). Ward and his team plan on escaping from the robbery toward a small cabin out of town, led by a guide named Gil Jackson (Michael Forest, Ninja Scroll, Eureka Seven Hi-Evolution 1), but Gil becomes aware of the plan. To make matters worse, there is a cave close to the cabin where a creature lurks, and it has a thirst for human flesh.

I didn’t like Beast from Haunted Cave. I really just wanted more Beast, but he’s barely in the film, and what is there is shrouded in so much darkness that it’s tough to get any action from the film. The pacing is fine enough due to its short run time, but I was far more interested in the horror elements than this robbery of gold bars. First-time director Monte Hellman (Iguana, Road to Nowhere) handles the film and cast well enough, but I found so many of the characters unlikable that I didn’t pine for their survival.

The creature design was interesting, and it was one of the reasons I wanted to explore it more. We just don’t get enough time with the Beast. The film was left open-ended in order to move towards a future sequel that ended up not happening, and sadly, it leaves another stain on the film. There just isn’t enough to grasp onto.

Beast from Haunted Cave starts out promising and the finale is quite enjoyable, but the film just doesn’t go where it needs to go. It just kind of fritters away its 72 minutes, leaving me wanting way more and not feeling satisfied with what I did get. Overall, this was a major letdown, and not of the top-tier Corman films.