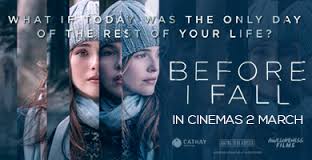 Before I Fall is a new young adult drama that premiered at Sundance last month and is set for a wide release on March 3rd.I got the chance to see it yesterday, and it was everything I thought it would be, which in this case isn’t exactly a compliment. 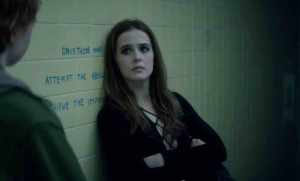 Samantha Kingston (Zoey Deutch, Dirty Grandpa, Everybody Wants Some!!) is a popular senior who is on her way to graduation. She has a close-knit clique of girls, a jock boyfriend, and a perfect life. That is, until she dies in a horrible car accident. Then, Samantha wakes up like nothing had ever happened. Soon, she discovers that she is reliving the same day over and over again. Sam needs to put the pieces together and make the best day she can in order to correct the passage of time and right the wrongs of her life.

I should begin with my frustrations at the screening I attended. Upon leaving, I overheard another guest exclaim “Wow! That was so unique! The coolest idea for a movie ever!” She wasn’t kidding, too. This was the most cliché film I’ve seen in a long time! Not only did a similarly structures Edge of Tomorrow come out just a few years back, but has anyone heard of Groundhog Day! Come on! Setting this film in February didn’t help as it only sought to remind me why Groundhog Day was better.

Before I Fall had Zero likable characters, Zero interesting plot points, and Zero redeemable qualities. Sam is not someone I’m rooting for, her motivations were not clear at several points, and her catharsis is neither earned nor sensible in the slightest. The entirety of the film is a meandering slog which didn’t make its repeating day any better.

Before I Fall might be the worst movie of 2017 were it not for the performances, which are not good but at least exceed worse fair like Rings and The Bye Bye Man. You can do better than this film. A lot better. Big skips from this reviewer.