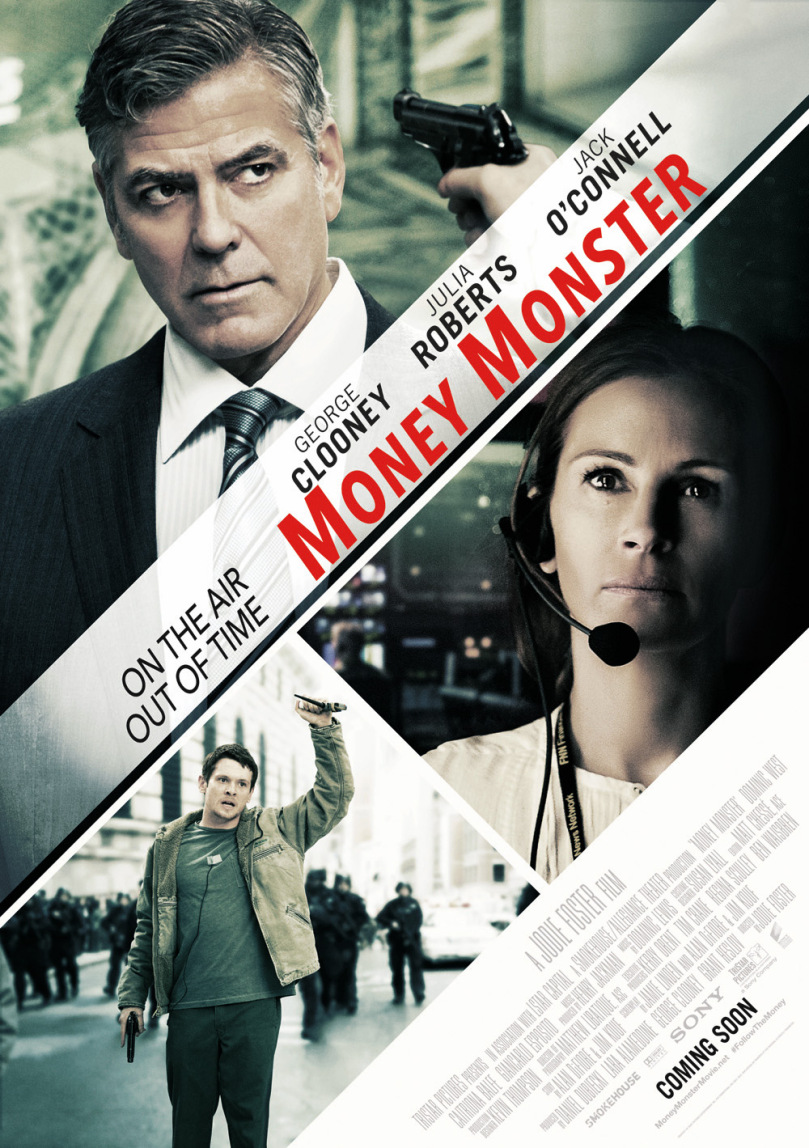 98 mins. Rated R for language throughout, some sexuality and brief violence.

I actually thought Jodie Foster (The Beaver, Home for the Holidays) had directed more films. Just putting that out there.

Money Monster, a popular finance and investment TV show, is currently airing their latest episode, starring financial expert Lee Gates (George Clooney, Gravity, Hail, Caesar!). As the show is airing, a deliveryman arrives and holds the building hostage, aiming his gun right at Lee. The man who holds Gates hostage is Kyle Budwell (Jack O’Connell, Unbroken, ’71), who lost every penny he had from his mother’s inheritance by investing in IBIS after it was endorsed on Money Monster. As the building becomes a media circus, Lee has to use the aid of longtime director and colleague Patty Fenn (Julia Roberts, Notting Hill, Mother’s Day) to talk Kyle down and keep himself out of the grave.

Money Monster is an interesting idea in itself, an angry investor takes a financial expert hostage on his own show, but the fire quickly burns out on this premise. As Lee and Patty work to keep Kyle from pushing a detonator, I slowly found myself uninterested in any of the characters, a shocking notion given the chemistry between Clooney and Roberts. Then, about halfway through the film, the implausibility meters breaks off on a strange tangent that seemingly makes no sense. That’s right, the ending of this film goes right off the rails and becomes rather silly.

Director Jodie Foster builds tension at the beginning of the film, but Lee Gates isn’t likable enough a character to inspire sympathy, nor really is Patty Fenn. Kyle is a rather stupid individual as well, and I don’t find myself on his side either. Really, I had a lot of difficulty deciding if who I’m supposed to root for.

All in all, Money Monster really falls flat very quickly on its intriguing premise and the movie never really gets back up. This was downright disappointing in every way.