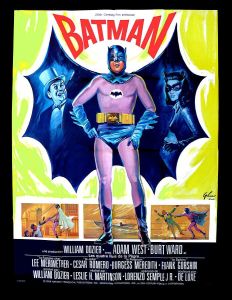 Director: Leslie H. Martinson
Cast: Adam West, Burt Ward, Lee Meriwether, Cesar Romero, Burgess Meredith, Frank Gorshin
Screenplay: Lorenzo Semple Jr.
105 mins. Approved.
I first saw the original Batman: The Movie (yeah, before Michael Keaton) about ten years ago. It was in the height of serious Batman Christian Bale’s reign as the caped crusader, and so I didn’t look upon the film too fondly. This year, I took the initiative to look back on Batman: The Movie in honor of Batman Day. Did my thoughts on the film change?

In the film, the dynamic duo themselves, Batman (Adam West, TV’s Family Guy, Meet the Robinsons) and Robin (Burt Ward, Moving Target, Beach Babes from Beyond) are tasked with defeating four supervillains in their devious plan to use a weapon capable of dehydrating people to hold the world ransom. Batman finds himself emotionally involved when The Catwoman (Lee Meriwether, TV’s Barnaby Jones, The Ultimate Gift) disguises herself as a helpless damsel in distress to lure him in. As The Penguin (Burgess Meredith, Rocky, Grumpier Old Men) sets his plot in motion, the caped crusader finds himself fending off sharks and ridding Gotham of bombs. Can Batman defeat the foes? Or will he find himself in deeply dehydrating water?
Camp for the sake of camp. The 1960s saw Batman as a silly and over-the-top representation of truth, justice, and the American way. The 1960s were also a pretty confusing and sometimes scary time period. The world didn’t need villains. We already had them. What the world needed was an escape from the real. And, with Batman: The Movie, they got it.
The first season of the Batman television series has finished, and the producers decided to hit upon a movie’s budget to increase their usuable bat gadgets, a pretty genius idea all said and done. It’s what helps make the later seasons of the show stay exciting and fresh.
Adam West and Burt Ward play off each other really well, and it is their chemistry that drives the film. Both actors play the material as seriously as possible, and it makes the fun moments of cheese work so much better than playing them for comedy. And the screenplay itself, from screenwriter Lorenzo Semple Jr. (Papillon, Flash Gordon) knows exactly what it needs to be.
From the rogues gallery, I particularly liked The Joker (Cesar Romero, The Little Princess, The Thin Man) and Meredith’s The Penguin. They have the most fun in role and absolutely steal their scenes.
Now, the film has some definite lagging issues in Act 2. By and large the best parts of the film are the Shark fight on the Bat Copter and the Bomb Chase sequence. The ending of the film falls flat too and isn’t all that memorable. 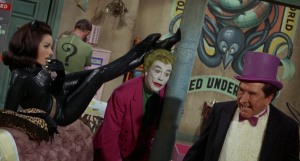 From the film’s winning score to some truly unique visuals, Batman: The Movie is an interesting time capsule of a time we may never see again (though an upcoming DC animated film looks to see the return of the 60s Caped Crusader). It’s a lot of fun and has the potential to be a great passing of the torch for young viewers just getting into Batman and Robin.
3.5/5
-Kyle A. Goethe