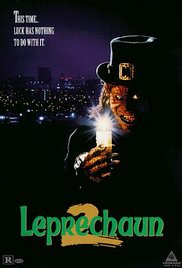 85 mins. Rated R for violence, and for nudity.

You’re damn right I picked Leprechaun 2 to watch today, and I hope I don’t regret it terribly. Spoiler Alert: I will.

Leprechaun 2 follows the same Leprechaun (Warwick Davis, Harry Potter and the Deathly Hallows: Part 2, Star Wars: Episode VII – The Force Awakens) as the first film (at least I think so, the last time he kicked the bucket in a fairly gruesome way and this time, he’s born out of a tree) as he searches for true love. A thousand years ago, he had fallen for a beautiful young woman, and according to some bullshit about turning 1000, he can claim her as his bride, provided that she sneeze three times and nobody say “God Bless You” (seriously, I can’t even make this up). The problem is that the young woman is the daughter of his slave, William O’Day (James Lancaster, The Prestige, Pirates of the Caribbean: At World’s End), who mucks it up to save her. One thousand years later, in present day 1994, the Leprechaun is back to attempt to claim her back when he discovers Bridget (Shevonne Durkin, Ghost in the Machine, Spermicide), a young woman who resembles the girl he fell for so long ago. Bridget’s boyfriend, Cody (Charlie Heath, The Beverly Hillbillies, Friends Til the End), and his boss/friend/guy Morty (Sandy Baron, Sid & Nancy, Vamp) must unite to trick the evil little Leprechaun and destroy him before he gets her to sneeze. Wow, I had trouble explaining all that.

Leprechaun 2 is pure shit. As I said before, I’m still not sure if this is supposed to be the same Leprechaun as before or if we are to think that they all look alike (that might put me in hot water). Warwick Davis is clearly the only one having fun here, playing off the uninterested cast as best he can. Director Rodman Flender (Idle Hands, Conan O’Brien Can’t Stop) cannot handle the poorly written screenplay from Turi Meyer and Al Septien (Chairman of the Board, Wrong Turn 2: Dead End).

Oh my God, I couldn’t defend this film if I tried. It’s a wonder even this one made it to theaters.

So, let’s just cover what is good. Warwick Davis can’t be faulted. Sandy Baron is probably the most skilled performer here and, again, does his best. There is a great scene involving  a lawnmower. The Leprechaun drives what amounts to a miniature Formula 1 death machine at one point. The credits were nice at the end. 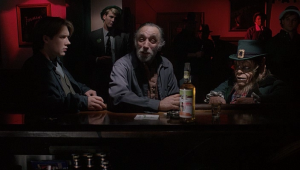 If you have already imbibed the green beer on this St. Patrick’s Day, then maybe you can stomach Leprechaun 2. If not, then I’m glad I gave you fair warning.

For my review of Mark Jones’ Leprechaun, click here.