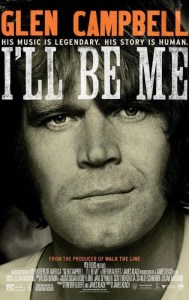 Here’s a truth for you: I’m not a fan of country music for the most part. Southern rock, certainly, but country music is a no-go. As far as Glen Campbell went, I knew the big hits, the ones that defined him as a performer. Then last year, I heard the song “I’m Not Gonna Miss You” and found it to be tragic and beautiful. It took some time longer for me to come across the film, Glen Campbell: I’ll Be Me, and it was worth the wait. 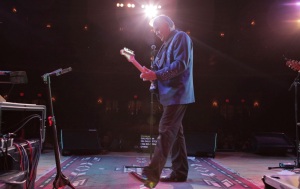 Glen Campbell: I’ll Be Me is a film about, you guessed, it, Mr. Campbell and his farewell tour. Director James Keach (Waiting for Forever, Blind Dating) followed Campbell and his family as they experience the trials of the tour life. But the film is about so much more than that. I’ll Be Me is the story of a man inflicted with Alzheimer’s Disease and trying to cope. It becomes all the more taxing for a man who must remember his presence on a stage in front of thousands.

On the surface, the story feels simple enough, but as Campbell’s family unfolds the difficulties, not only for the famed singer but for them as well, the doc evolves into one of the most tragic and heartening experiences I’ve ever seen. Keach knows how to configure the narrative nicely to challenge the means by which we see Alzheimer’s. It isn’t just an ice bucket challenge or a novelty. Alzheimer’s is made all the more saddening in the film as Campbell’s family recalls all the memories that he has no knowledge. All the life he has saved being taken away from him moment by moment. The only real flaw of the film is the running time, which feels like it could be shortened to more accurately feel the impact. 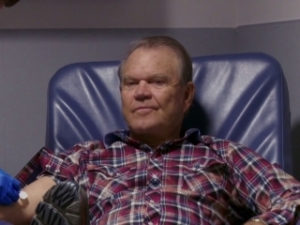 Glen Campbell: I’ll Be Me is a very interesting and thought-provoking documentary. It’s a wonder it was only nominated for Best Original Song at last year’s Academy Awards (though, to be fair, the song is phenomenal). Check this one out as soon as possible.