This week’s short film is Lava, a 2014 film most widely recognized as the Pixar short released with this year’s Inside Out. 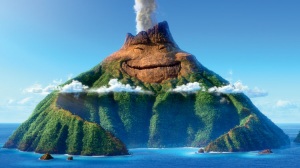 Lava is the story of Uku (Kuana Torres Kahele), a lonely volcano who wishes for someone to share in his song. He sees the wildlife all around him enjoy the company of others, and for millions of years, he waits for his loneliness to end. The short is set to a song written by writer/director of the film, James Ford Murphy.

Lava received a lot of flack upon release, many Pixar fans discussing the film’s underwhelming appeal. I, on the other disagree. The film is beautiful in its simplicity. It’s the classic tale of patience and features a stunningly graceful musical number. The low amount of dialogue allows for a deeper appreciation of the imagery, which is gorgeously crafted.

All in all, I loved Lava, a film packed with emotional triggers throughout its 7-minute runtime. See it now.