Okay, so John Cusack (Being John Malkovitch, Drive Hard) signed on to this film immediately after hearing the title, but then again, wouldn’t you?

Hot Tub Time Machine tells the story of three friends who have grown apart. Adam (Cusack) has just become single and alone…again, Nick (Craig Robinson, This is the End, Get on Up) works at his dead-end job and dreams of being a famous musician, and Lou (Rob Corddry, TV’s Childrens Hospital, Muppets Most Wanted) is a drunk loser…still. But after a near-fatal accident, the three friends decide to relive their glory days at Kodiak Valley, they, along with Adam’s nephew Jacob (TV’s Greek, A Merry Friggin’ Christmas), come across a malfunctioning hot tub that sends them back in time to the 1980s where they have the chance to right their wrongs, or mess their entire future up.

First of all, the opening credits. This is how you open a film. It sets the tone with a goofy montage of people partying in hot tubs. Simple, yet perfect. The entire opening sets the stage for this film perfectly. You know exactly what you are getting into.

John Cusack is the perfect guy to carry this film. A staple of 80s pop culture himself, Cusack’s helpless romantic Adam thinks he can fix his broken relationship to his Great White Buffalo (long-lost love), but he can’t see his own strengths. 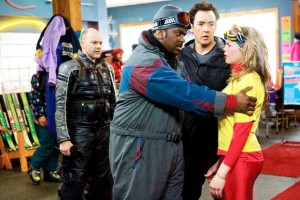 Really, this film is nearly flawless as a piece of comedy gold. There are two jokes that fall flat at the beginning, but this film’s references to masterpieces  like Better Off Dead…, Back to the Future, and The Karate Kid come off great and feature a group of actors not fighting for themselves but servicing the group and the film, a hilarious screenplay from Josh Heald, Sean Anders, and John Morris added to the well-stylized direction of Steve Pink (Accepted, About Last Night) are what makes Hot Tub Time Machine near-perfection. If you haven’t seen it, see it. This just might be the Great White Buffalo you’ve been waiting for.