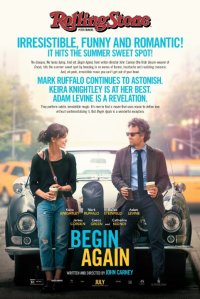 In Begin Again, Dan (Mark Ruffalo, The Avengers, Foxcatcher) is an recently unemployed music producer who has just discovered Gretta (Keira Knightley, Pirates of the Caribbean: The Curse of the Black Pearl, Jack Ryan: Shadow Recruit), a young woman with a rare voice who isn’t interested in pursuing a character. Dan has a strained relationship with daughter Violet (Hailee Steinfeld, True Grit, Pitch Perfect 2) and her mother Miriam (Catherine Keener, Captain Phillips, Enough Said), but not Gretta provides a much-needed inspirational boost to Dan who wants to use her to get back in the game.

Begin Again is little more than a cheese-filled sandwich trying to disguise itself as a movie of substance. These characters are flat and uninspired and there are better versions of them sprinkled throughout better films. I found myself checking my watch out of boredom several times here.

The film is almost completely improvised and it proves one thing very well: these actors should not improvise lines. There are entire sequences of uninspired and uninteresting exchanges between the characters.

As for the Oscar nominated son “Lost Stars” from Gregg Alexander and Danielle Brisebois, it isn’t that bad. A nice song sung in several different ways throughout the film. Not deserving of the award, but perhaps worth the nomination. 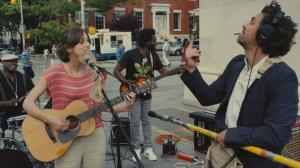 Begin Again is a carbon-copy of so many other films just like it, with one exception: somebody smudged this copy somewhere along the line. Just keep in mind: there are better films about the music industry. Many.