Today we are going to look back on Star Wars: Episode I – The Phantom Menace, a film that has truly polarized fans of perhaps the most-beloved sagas in motion picture history.

Jedi Knights Qui-Gon Jinn (Liam Neeson, Schindler’s List, Taken 3) and Obi-Wan Kenobi (Ewan McGregor, Trainspotting, Mortdecai) are about to take part in trade negotiations with the insidious Trade Federation over trade disputes. When negotiations go south and the Trade Viceroy takes control of the peaceful planet of Naboo, the Jedi take refuge on the remote desert planet of Tattooine, where they meet young Anakin Skywalker (Jake Lloyd, Jingle All the Way), a child who may just be the Chosen One, a Jedi who can bring balance to the Force. 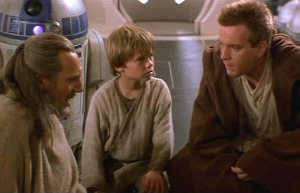 Director George Lucas (American Graffiti, THX 1138) returned to his beloved Star Wars franchise sixteen years after 1983’s Return of the Jedi to create one of the most discussed entries in the canon. Some love it; many loathe it. I find it to be an enjoyable, albeit flawed entry in the series.

Jake Lloyd absolutely destroys his role as Anakin by not understanding the characters and delivering his lines as though he is just reading them. His scenes can’t even be saved by Neeson and McGregor. Anthony Daniels (The Lego Movie, The Lord of the Rings) and Kenny Baker (The King and I, Willow) return as C-3PO and R2-D2 and help to tie this film to the others. Then there is Ian McDiarmid (Sleepy Hollow, Annie: A Royal Adventure!) as Senator Palpatine. I love his performance here. He is slippery like a politician should be with just a note of secrecy.

I want to say something about George Lucas. I might get flack or praise, not sure which, but George Lucas can direct just fine. He cannot write all that well. He should stick to storytelling but leave the screenplay work to others. Look back at The Empire Strikes Back. It is considered by many to be the best in the saga, but it is the only one not specifically written by Lucas. Just sayin’.

The flow of the film is nicely tied together. I enjoyed the time spent on Tattooine, and I felt like the Naboo sequences add something new to the series. I honestly didn’t care much for Jar Jar Binks, but I also accepted that galaxies far far away probably had annoying aliens. There just has to be some.

The effects are wildly well put together, from the podrace sequences to the battle for Naboo. The new Yoda (played by Frank Oz, Zathura, Monsters, Inc.) is more advanced than previously, though it doesn’t really look like Yoda. 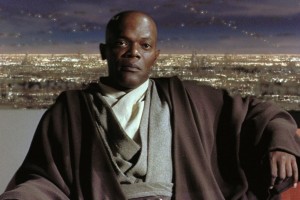 Looking back at the first chronological Star Wars adventure brings up a lot of questions. How has the film held up? Did the love or the hate soften? Will Star Wars: Episode VII – The Force Awakens have the same reception? I don’t have the answers to all those questions, but I can say that expectations are often the culprits for long-waited installments. I like Star Wars: Episode I – The Phantom Menace. It is far from the perfect Star Wars film, but it is an enjoyable reintroduction to the galaxy and the time that we love so much.