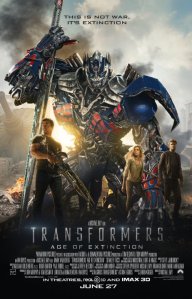 It has been seven years since Transformers came out. I can’t believe I’m sitting here writing a review of the fourth film in this series, Transformers: Age of Extinction. This film is a bit of a departure in that it takes place five years after The Battle of Chicago, as it is referred to (which took place in Dark of the Moon) and features an entirely new cast of characters. Literally, nobody returns to this franchise for the fourth film except some of the voice actors for the Transformers.

This installment introduces us to Cade Yeager (Mark Wahlberg, Boogie Nights, Ted 2), a novice inventor, and his daughter Tessa (Nicola Peltz, TV’s Bates Motel, The Last Airbender). Cade is a picker who scavenges for parts to use in his various inventions. He and his assistant Lucas (T.J. Miller, Cloverfield, Big Hero 6) come across a truck in an old abandoned theater and take it home to discover it is Optimus Prime in hiding. A government official named Harold Attinger (Kelsey Grammer, TV’s Cheers, The Expendables 3) has hired a human hitman (Titus Welliver, The Town, Promised Land) and a bounty hunter Decepticon named Lockdown to hunt down and destroy the remaining Transformers. Meanwhile, a big-time business named Joshua Joyce (Stanley Tucci, The Hunger Games, Muppets Most Wanted) is developing new technology incorporating Autobot tech and using it to build his own Transformers.

The plot is at least a new direction for this series. I was getting tired of the limited character development of Shia LaBeouf. This film isn’t great, but it certainly epitomizes the Michael Bay promise: likable trash. I had a lot of fun watching this movie. It just felt newer, and it had a lot more in terms of acting prowess (from Wahlberg, Tucci, Grammer, and Miller). The plot runs on for damn near forever, but I’ve come to expect that from this series and I didn’t feel as restless as I had from the last few movies.

I also absolutely love the design of the new Transformers in this installment. Hound (voiced by John Goodman) is a new Autobot who plays off like an old army colonel. He is an absolutely fantastic and angry beast who actually transforms to have a cigar in his mouth, too. Drift (voiced by Ken Watanabe) is a samurai who has blades that come from his transformation into an Apache helicopter. The faces are so well-defined that this is the first Transformers movie where I know all the Transformers based on looks. These are different characters.

And then there’s Lockdown. This is a complex character who is joining the US government to take on the Autobots and also has plans of his own.

I enjoyed this movie more so than I thought, and perhaps that comes from hearing all these bad reviews coming out of this movie’s initial release. I guess I had my hopes down.

One major flaw came from Galvatron, who is one of the new lead villains, a man-made Decepticon who feels so underdeveloped that it becomes really tough to fear him.

All in all, this was more fun than expected. Make sure you have a comfortable chair, because you will be here awhile, and non-Transformers fans need not apply.

What did you think of Michael Bay’s Transformers: Age of Extinction? Did it transform into a masterpiece or did you “Roll Out” of the theater? Let me know!

For my review of Transformers: Revenge of the Fallen, click here.

For my review of Transformers: Dark of the Moon, click here.