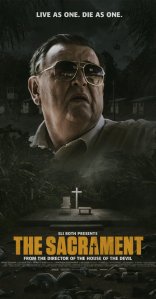 Ti West’s The Sacrament is a cult movie. By that I mean it is a movie about a cult. Presented in found footage, it tells the story of a news crew who follow a young man searching for his sister (Amy Seimetz, TV’s The Killing, You’re Next) who has gone to live in a community called Eden Parish run by a mysterious leader known only as Father. As the mystery surrounding this supposed Paradise begins to unravel, it is clear to the crew that they may not make it out of Eden Parish alive.

I have not always been the biggest Ti West fan. I happened to believe that his only quality work came from his section of the phenomenal found footage film V/H/S, and I can now add The Sacrament to the list of good works by West. Honestly, this movie has the potential to piss people off, and it should. This is one of those horror films where the horror is right there, real, powerful. It isn’t some demon or ghost, but is a man, and that has the potential to make it even scarier. Man is real, and man is dangerous.

The performances in the film are good enough for believability, with special honors to Gene Jones, who portrays Father. His is a chilling performance. I remember asking if he was some sort of monster as the movie moved on, and I was right, kind of.

I didn’t find the found footage all that hampering to the film here as well. So many recent movies have taken the Paranormal Activity route and have come up with nothing good (we all know I’m talking about Devil’s Due), but here, it makes sense and is fluid to the story. Not perfect mind you, but serviceable.

One of the best parts of this movie is the ending. I won’t say much except that it surprised me for a found footage film. I was shocked by the ending. That’s all I will say.

The Sacrament is not a perfect film. It has the luxury of producer Eli Roth, who has the potential to create something truly terrifying. Hopefully Ti West will realize what worked in this movie and what didn’t. Hopefully he will learn, because this was some pretty scary shit.