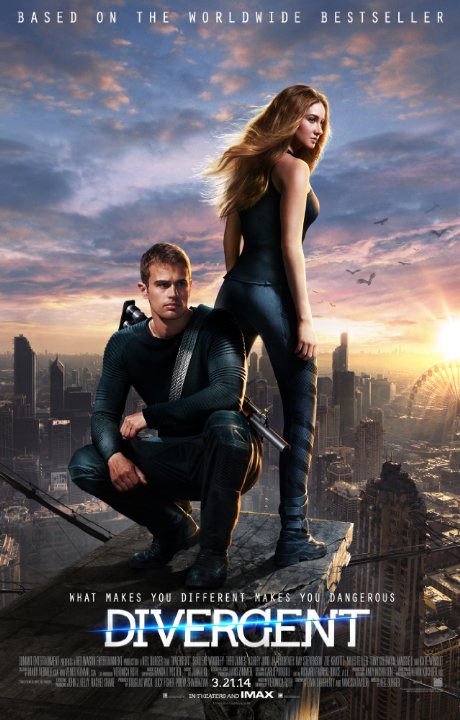 139 mins. Rated PG-13 for intense violence and action, thematic elements and some sensuality.

Divergent is the story of Tris (Shailene Woodley, The Descendents, The Fault in Our Stars) a teenage girl who exists in a dystopian landscape of the near future. In this interpretation of the future, there are five factions each defined by literally one trait. There is Abnegation, a group of those who practice selflessness (of which Tris is born into). There is Amity, those who choose peace over all else. There is Candor, the truth-tellers. Let me repeat that, there is a group of people that tell the truth, and that is it. There is Erudite, those of intelligence. There is finally Dauntless, the strong and brave (of which Tris envies). The Dauntless are presented as apparently a mixture of parkour and West Side Story. There are also the factionless, who have been sent away from their group from disobeying or failure. Then, there is Divergent, someone who embodies multiple factions over one. The people of future Chicago do not care for Divergents as they are unpredictable. Tris is, at the start of the film, about to perform in a test that will determine where she should be placed. It is basically a big sorting hat, with one major exception: the test doesn’t really matter because you can just choose whichever faction you would like to join permanently. Tris takes the test and discovers she may be a Divergent, so she chooses Dauntless just because. There she meets Four (Theo James, TV’s Golden Boy, Underworld: Awakening), a Dauntless leader who may just have a few secrets of his own. As she becomes more accustomed to Dauntless life, she also becomes more susceptible to being discovered as a Divergent, and the entire story is about the testing she will do to prove herself a worthy Dauntless.

So anyway, that is the movie.

My first problem with this movie was the whole test thing having virtually no effect on the story in the way that anyone can choose any faction. I just found it an extra-convoluted way of fashioning a plot point.

Then, there is this faction breakdown, how can there be only five traits worthy of having a group of people and why would you want to keep these groups separate? I just don’t get the gravity of the situation and how this helps whatsoever.

Four’s character is kind of stupid. So if you haven’t seen the posters, avert your eyes, because [SPOILER ALERT] Four has a giant tattoo on his back of the five factions, which essentially tells us that he is a Divergent as well. Perhaps he would’ve been better off with a tattoo of a big bulls-eye, since that is pretty much what he announces to the world with it.

This isn’t really a complaint, but I did find it odd that this film is like a whos-who of people who have gotten it with Shailene Woodley in other movies, with Miles Teller (from The Spectacular Now) as an adversary, and Ansel Elgort (from The Fault in Our Stars) as her brother. Blech.

I want to point out the pacing as well, this movie drags on like a son of a bitch. By the time revelations start coming on, I had completely stopped caring and I just didn’t want to hear any more about these factions.

The performances are good (or merely as good as this poorly written script would allow) but none in particular stand out because the characters are too flat and one-dimensional. Now, I haven’t read the book series, but I should hope we get to flesh these characters out in another installment.

The look of this film is pretty much the unused sets and costumes from The Hunger Games movies. I could go on and on about the superiority of that franchise at this point, but you probably can already tell that. 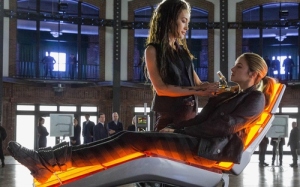 All in all, Divergent is a disappointing and underwhelming beginning to this franchise, which has already set markers for a remaining three films (the final book will be split into two films, because fuck, why not?). Perhaps all of these confusing and convoluted plot points make more sense in the book, so I won’t trash the novel because, as I said before, I haven’t read it yet, but as far as films go, this is a very boring and lazy fantasy.

So what did you think of Neil Burger’s Divergent? Did you pass the test or choose to be factionless to get out of the theater? Let me know!