I was pretty excited to see Oculus recently. I truly enjoyed director Mike Flanagan’s previous work in Absentia (I saw the premiere at the Fargo Film Festival back in 2011), and I wanted to see where he take us next when he had a bigger budget and more room to play. Unfortunately, I spent most of Oculus arguing with myself over whether I was enjoying myself or not. Not ever a really good sign. It felt to me like a film that was trying to confuse its audience so they wouldn’t see all the ridiculous plot points for what they really were.

Oculus tells the story of Kaylie Russell (Karen Gillan, TV’s Doctor Who), who is trying to prove to her brother, Tim (Brenton Thwaites), that the reason their parents went insane several years ago was because of a haunted mirror. Initially, thoughts went through my head about the previous horror film Mirrors, a decent effort from director Alexandre Aja. Sadly, this film falls flat even after a pretty fantastic opening setup.

The film plays out in two timelines simultaneous, one with Kaylie and Tim as children, the other years later as adults. Playing them against each other proves pretty interesting, except at the end when the timelines devolve into a confusing, jumbled and ultimately, disappointingly predictable finale.

Oculus does a great job setting the events of the film into motion. We are given a solid premise and even rules to govern the journey we are going on as Kaylie describes exactly how she plans on proving the mirror’s intentions of evil and how she planned on destroying it. Soon after, however, the film departs from these rules and chooses to never reference them again.

I also had a problem with the mirror’s motivations. Okay, I get it, that sounds silly, but in any horror film, you have to get what the killer or monster’s motivations are or what the hell does it matter? Michael Myers was trying to kill all his relatives. Jason Voorhees was the closest thing to birth control for Crystal Lake, hacking and slashing his way through teens as vengeance for his dead mother. Freddy Krueger was also all about revenge, and Chucky the killer doll just wanted out of his plastic body. Oculus’ mirror, however, plays tricks on people. Some of them are meant to maim or kill, but other times, it plays out like a violent joke. One such scene, where the mirror leads Kaylie to believe that she has bitten into a light bulb gets us to see that it was only an apple. Why would a mirror do that? Wouldn’t the opposite be much more terrifying and gruesome?

This’ll sound funny as well, but I didn’t feel like the mirror was a well-built character. It didn’t have enough presence in the film. For all we know, it could’ve been a haunted oven or house or pretty much anything. It didn’t really use its reflection to terrorize. There was nothing to tell us the mirror was really behind anything. Its backstory kind of disappointed as well. If this becomes a franchise, I would like to see it explored much more. 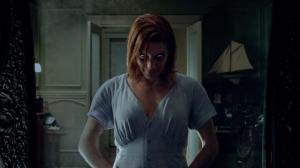 I’ve heard a lot of reports that Oculus may be looking at becoming a franchise, and if so, it has some digging to do before it reaches a status worthy of yearly trips to the movie theater.  I see potential, and there were a few great moments about this film, but all in all, I drove home from the movie not angry, but disappointed, and in the end, isn’t that worse?

Have you seen Oculus? What did you think? Comment below.