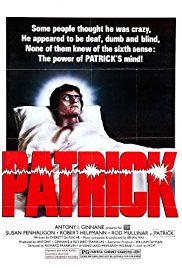 I really just picked out Patrick because I have a friend named Patrick. This one’s for you, Patrick.

So Patrick is an Ozploitation horror film from the 1970s  directed by Richard Franklin (Psycho II, Road Games). Susan Penhaglion (Soldier of Orange, Top Dog) plays Kathy, a nurse who takes on a new patient in Patrick, who killed his parents three years ago and now lies in a coma. Hospital owner Dr. Roget (Robert Helpmann, Chitty Chitty Bang Bang, Henry V) explains that Patrick is being kept alive for studies. What they do not know, however, is that Patrick has psychokinetic powers and can leave his body at will to commit all sorts of horrors. Can Kathy figure out how to stop it?

The movie, not my friend. Patrick, you have aged just fine.

Patrick, the movie, hasn’t aged well, but I think altogether, it didn’t work long ago and age has just not been kind.

I didn’t find the characters interesting, but I respect that they too started out well and were interesting at the beginning, but failure to further explore them with an interesting narrative tanked the movie.

I’ve heard that Everett De Roche’s screenplay was, at one point, over 250 pages (a massive tome that would’ve translated to a four-hour film), and that Franklin helped him fine-tune it. Well, the film feels like it retained that weighty rambling tone but cut all the interesting pieces.

Sadly, I don’t like Patrick all that much. The movie. My friend Patrick is pretty cool. I don’t think you’ll like Patrick. But if you ever meet my friend, he’s alright in my book.

[The poster is pretty damn cool, though, right?]

For my review of Richard Franklin’s Psycho II, click here.