Wow, I just saw the teaser trailer for The Birth of a Nation, from director Nate Parker. The film is the story of Nat Turner, who led a liberation movement in Virginia. I always found stories like this to be inspirational and interesting, as long as they are made well, and I’ve been hearing tons of praise coming out of the festival circuits, particularly from Sundance.

The trailer gives us the tone and scope of the film without dropping too much, and it definitely got me excited for the film, which releases later this year. We also get a look at Armie Hammer (The Social Network, The Lone Ranger) and Jackie Earle Haley (Watchmen, A Nightmare on Elm Street), who both only elevate the film for me. I cannot wait.

So what did you think? Will you be seeing The Birth of a Nation when it releases? Let me know.

The Birth of a Nation releases October 7th.

George A. Romero (Night of the Living Dead, Bruiser) has tackled zombies. I think we all attest to that. He has mastered camp horror (please check out his work with Stephen King in Creepshow, awesome film). There are a lot of things he can do with a horror film. Maybe a killer monkey just isn’t one of those things. 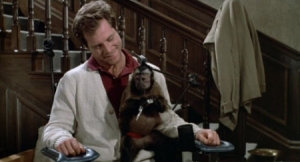 I recently discovered Monkey Shines, a film I had been looking for since I saw the VHS cover some years back at a rental store (remember all those things?) and I was finally able to watch it.

Allan Mann (Jason Beghe, TV’s Chicago P.D., Thelma & Louise) is a successful athlete who is run down in a traffic collision and becomes a quadriplegic. Suffering from depression and the inability to cope with this new life, Allan is gifted with a monkey from his friend Geoffrey (John Pankow, TV’s Mad About You, Morning Glory). The monkey, named Ella, has been trained by gifted support animal trainer Melanie (Kate McNeil, The House on Sorority Row, Glitter). Unfortunately, Ella forms an obsessive and violent bond with Allan and begins to kill those around him. Yeah, it’s that kind of movie.

I think the major flaw with Monkey Shines is exactly what doomed it from the start. It is a horror film that lacks horror. Here is a film with an animal that doesn’t seem all that dangerous, and it doesn’t convince me that Ella is. It isn’t easy to convince us that an animal with such an affectionate bond with a human can alter that love so quickly. We have stories that have succeeded where Monkey Shines failed. We have Stephen King’s novel Cujo, an excellent little exercise in creative horror about a dog who becomes the embodiment of fear when rabies (or as King hints at, pure evil) inhabits its body. Cujo (the book, not the movie) was an achievement. Monkey Shines was not. It just plain isn’t scary. Some of it just comes off as funny.

We don’t have any horrible performances. We get some early work from Stephen Root (TV’s King of the Hill, The Lone Ranger) and Stanley Tucci (The Hunger Games, Transformers: Age of Extinction) here, but little more.

Although it feels tough to fully blame writer/director Romero, who had his finished film taken away from him multiple times and finally after being completed, the studio put a different ending in that makes it feel very un-Romero. 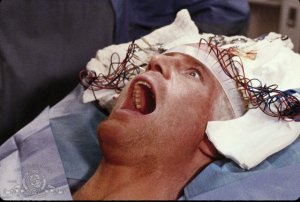 Monkey Shines was taglined as “An Experiment in Fear.” I had my hypothesis. I had my conclusion. This is one experiment we need not try again.

For my review of George A. Romero’s Night of the Living Dead, click here.