Christmas is a tough deadline to hit for major films looking to be under awards consideration. Films like Django Unchained and The Wolf of Wall Street both finished just in time to have screenings before the cutoff. This year, the contentious Cats adaptation from Tom Hooper may miss those award deadlines, which may spell a death knell for the film, which has received some criticism based purely on its first trailer’s reception.

Word from the studio is that the film will not be able to be screened until the middle December, after votes close for the New York Film Critics, the Golden Globes, and the SAG Award.

This has to be very disappointing for the studio and Hooper, who is fighting an uphill battle here. Hooper directed award favorites The King’s Speech and Les Miserables, and I have to assume that they expected to add Cats to that list.

Still, they will continue working their asses off to get it done as quick as possible, hoping to at least get screenings in before the cutoff of some award nominations. This won’t spell wins all around because a late start to awards campaign can be another battle altogether.

So where do you stand with Cats? Does it stand a chance against other films competing for those coveted nominations? Let me know/Drop a comment below!

I heard that House on Haunted Hill is celebrating its 20th anniversary this year, and I absolutely had to rewatch this film. The last time I interacted with this property was when I watched the sequel, Return to House on Haunted Hill, many years ago, so this was a perfect opportunity to revisit this 90s horror film.

Stephen Price (Geoffrey Rush, The King’s Speech, Final Portrait) is throwing his wife a hell of a birthday party by inviting some guests to the Vannacutt Psychiatric Institute for the Criminally Insane, a now-closed former asylum where the patients revolted and murdered most of the staff sixty years earlier. The invites have gone out, and guests have started to arrive. There’s only one problem. All of the guests who arrive are people that neither Stephen nor his wife Evelyn (Famke Janssen, X-Men: The Last Stand, Asher) had invited. Stephen and Evelyn each suspect each other of a murder plot, but Stephen’s not going to let his plan go south, and he offers each of the guests a million dollars for staying the night in the house. Evelyn has plans of her own for the night, but the House on Haunted Hill has plans for all of them tonight.

Let me preface everything I’m about to say here. This is not a good movie. In fact, it’s a bad movie. Like many of Dark Castle’s films from the late 90s/early 00s, House on Haunted Hill is super-cheesy and super-silly and super-dumb. There’s a whole lot of bad surrounding this film including an upping-the-ante from the original film’s over-the-top premise. The Stephen-Evelyn dynamic is so excessive throughout. House on Haunted Hill is batshit.

It’s also so-bad-it’s-good in a lot of ways. It’s a bad movie that is so much fun to watch for some of its elements. Let’s talk about the bad stuff that surprisingly works. I love Stephen and Evelyn upon a rewatch. Seeing them both suspect each other of murder while also plotting the very same thing is a lot of fun. I believe that Geoffrey Rush knows exactly what kind of movie he’s in and he plays to it well. This is the strength of getting an actor like Rush to do horror. He gets the movie. 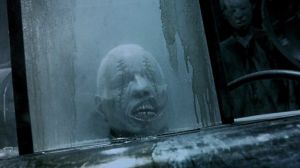 Chris Kattan (A Night at the Roxbury, TV’s Bunnicula) also kills it as Pritchard, the guy that is an exposition-machine/comic-relief for the film. He mixes his unhinged performance into the exposition and comedy and it’s just so crazy. He is perfectly cast in this film and becomes an equal to Rush’s Stephen Price.

I also like the idea of an all-consuming evil inhabiting the house is really cool. Some of the CG near the end of the film hasn’t aged well enough to work, but as a plot element, it’s still very fun. Many of the effects in the film still look pretty cool, especially how Dr. Vannacutt’s ghost doing that shaky-shaky effect, but the darkness effect is pretty bad.

So what doesn’t work in the film? Most of the remaining cast. Outside of Rush, Kattan, and Peter Gallagher (American Beauty, TV’s Grace and Frankie), no one in the film really know what film they’re in. We spend just as much time as possible with many of the other party guests, and the scenes they appear in go absolutely nowhere.

House on Haunted Hill is a movie that works despite all the bad things in the movie. Don’t get me wrong. It’s not a good movie, but it’s bad works pretty well if you see it from a certain point of view. I would suggest it as a solid 90s B-horror film. 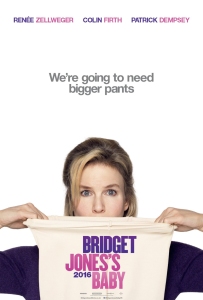 Director: Sharon Maguire
Cast: Renee Zellweger, Colin Firth, Patrick Dempsey, Gemma Jones, Jim Broadbent, Emma Thompson
Screenplay: Helen Fielding, Dan Mazer, Emma Thompson
122 mins. Rated R for language, sex references and some nudity.
Nobody was more excited for Bridget Jones’s Baby than…my fiance. Me? Meh. While I mildly enjoyed Bridget Jones’s Diary, I had nothing but bad things to say about The Edge of Reason, so now, some twelve years since we last saw Bridget, was I excited? No. Did I end up enjoying it? Perhaps.

Bridget Jones (Renee Zellweger, Chicago, Case 39) has finally reached her ideal weight, but that doesn’t seem to be solving any of her other problems, especially in her love life. So when a work friend drags Bridget to an outdoor music festival, she meets and spends the night with Jack (Patrick Dempsey, TV’s Grey’s Anatomy, Transformers: Dark of the Moon). A week later, she reunites with her ex Mark Darcy (Colin Firth, The King’s Speech, Kingsman: The Secret Service). Then, the shocker: Bridget Jones is pregnant, but she has no idea who the daddy is or what to do with the two men who now want her heart.
I can’t believe I’m about to say this: I actually enjoyed Bridget Jones’s Baby. Way more than I thought I would. I found Jack Qwant to be a much more interesting foil to Mark Darcy. I like that Hugh Grant’s Daniel Cleaver is dealt with in an interesting way that allows his absence to not halter the film’s progression. I even enjoyed the surprising celebrity cameo.
Now, I had plenty of problems with the film. I felt like the first act of the film takes way too long to get going. You know the film is called Bridget Jones’s Baby, so you know she is having a baby, but it takes so long to set it up that it does lose focus. The finale also has the opportunity to take a few risks but instead the plot takes a safe route and the film suffers for it.

Some of the best moments from Bridget Jones’s Baby had me laughing out loud in the theater and they were scenes that featured in the trailer but worked so much better in the finished film. The cast all know their characters well by now and the new additions like Dempsey and Emma Thompson (Love Actually, A Walk in the Woods) as Dr. Rawlings fit in nicely. Altogether, it’s a fitting conclusion to this trilogy of sorts that should work for fans of the original.
3.5/5
-Kyle A. Goethe
September 14, 2016 1