Okay, everyone, last night, Chris Rock hosted the 2016 Oscars, and it was full of surprises and controversy! But amidst all that, how did it go? Well, I have a few bullet points thoughts on the matter:

Those are my thoughts on the show, but I want to hear yours, both on the awards show and the winners! Did Spotlight deserve the win? Did Leo? Why was Abe Vigoda missing from the In Memoriam? And seriously, did David O. Russell think everything was that hilarious last night? Let me know! 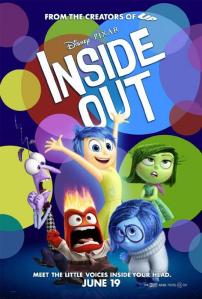 94 mins. Rated PG for mild thematic elements and some action.

Where did Pixar go? It’s been a few years since they have released something epic. Well, here comes their biggest risk: Inside Out.

Inside Out is the story of Riley (Kaitlyn Dias), a young girl who is moving away from her childhood home in Minnesota for the new world of San Francisco with her mom (Diane Lane, Man of Steel, Every Secret Thing) and dad (Kyle MacLachlan, TV’s Twin Peaks, Justice League: The New Frontier). But the story is about so much more than that. It also follows Riley’s emotions, specifically the struggling partnership of Joy (Amy Poehler, TV’s Parks and Recreation, They Came Together) and Sadness (Phyllis Smith, TV’s The Office, Alvin and the Chipmunks: Chipwrecked). After Sadness creates a sad core memory for Riley’s first day of class in her new school, Joy feels the need to isolate Sadness from accessing Riley’s emotional control, sabotaging Joy’s friendship with her emotional partners.

Inside Out is a simple yet complex concept. It isn’t a kids movie; it’s an adult film that also appeals to children. This film challenges viewers and engages them in a thought-provoking story. The voice work from Amy Poehler, Lewis Black (TV’s The Daily Show, Accepted) who portrays Anger, and Richard Kind (TV’s Spin City, Obvious Child) who voices Bing Bong, Riley’s old imaginary friend.

The visual look of this film is glorious considering most of it is spent in a few specific locations. I didn’t find myself pulled out of the story in either Riley’s story or that of her emotions. The emotional characters too have such stunning animation that really brings out the individual emotions as characters rather than stock one-note beings.

Looking back on Inside Out, I get the feeling that it may be Pixar’s riskiest move, but also one of their biggest successes. The company continues to leap forward in the storytelling medium by choosing difficult subject material and conveying it in such a unique and enjoyable way. Great job all around, Pixar, and I look forward to seeing what comes next.

So what did you think of Pete Docter’s Inside Out? Did it open you up or bring you sadness? Let me know! 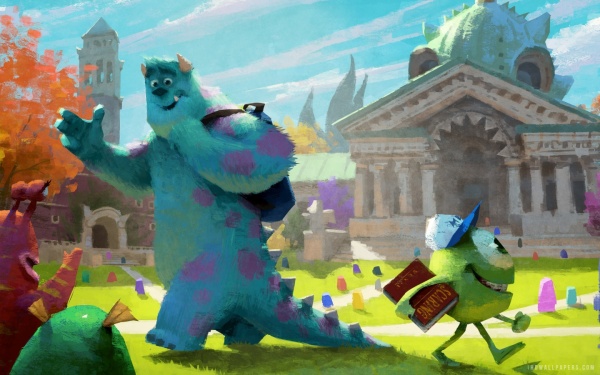 Pixar sequels scare me. I wasn’t a big fan of Toy Story 2. I hated Cars 2. Toy Story 3 was great, but it felt like the exception that proved the rule. When Pixar announced that my favorite property Monsters, Inc. was getting a prequel, I was both shocked and intrigued by the concept. When I discovered that we would be seeing the story of Mike and Sully meeting in college, I was still very confused. Then, I saw it…

In Monsters University, we get another look into the unique universe that Pixar created where monsters exist and get energy from the screams of children, where a young monster named Mike Wazowski (TV’s The Comedians, When Harry Met Sally…) experiences disapproval by his peers in his attempts to become a professional scarer. But he finds a new rival in fellow student Sully (John Goodman, TV’s Roseanne, The Gambler). When both students are kicked out of the scaring program, they decide to join Oozma Kappa, a failing fraternity, in an effort to win the Annual Scare Games and earn their way back into the scaring program, proving to their judgmental Dean Hardscrabble (Helen Mirren, The Queen, Woman in Gold) that they have what it takes.

Pixar has great timing. Releasing Monsters University at a time when fans of the original film are entering the college portion of their lives is perfection, much in the same way they did with Toy Story 3 a few years previously. Great working of their audience.

The voicework here is phenomenal, getting great work from the veterans as well as new additions Helen Mirren and Nathan Fillion. Charlie Day absolutely steals his scenes.

Monsters University is a perfect prequel, rarely feeling the need to fall back on referencing the original. For the most part, it blazes a new trail and knows it doesn’t have to embrace a cliché finale.

For my review of Pete Docter’s Monsters, Inc., click here.

I might get some trouble for reviewing a family film in the 31 Days of “Horror” category for the month of October, but I should stress. These posts are meant as a celebration of horror, and in that way, Monsters, Inc. is very fitting.

Pixar is a brand name all its own these days, about as recognizable as the name of its owner, Disney. Known for creating fully realized worlds that are capable of translating highly complex moral questions, Pixar is perhaps most well known to me for the creation of Monsters, Inc., a gorgeous little gem from 2001. 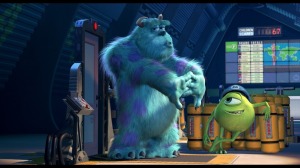 It tells the story of James P. Sullivan or “Sully” (John Goodman, TV’s Roseanne, Transformers: Age of Extinction) and his roommate and best friend Mike Wazowski  (Billy Crystal, When Harry Met Sally…, Parental Guidance), two monsters existing in a world parallel to our own, in which their main source of power and energy comes from human children’s screams. It isn’t an easy job scaring the screams out of kids anymore, especially when a single touch could kill you. But when a child called Boo (Mary Gibbs, The Lion King 2: Simba’s Pride) is found after hours in Monsters Incorporated, where Mike and Sully work, the two find themselves in quite a pickle trying to right the many wrongs and solve the mystery of why she is there. Mike and Sully have to discover while how fellow scarer Randall Boggs (Steve Buscemi, TV’s Boardwalk Empire, Fargo) is involved, get the information to boss Henry J. Waternoose (James Coburn, The Great Escape, Snow Dogs), and avoid Mike’s girlfriend (for her own safety), Celia (Jennifer Tilly, TV’s Family Guy, Bound).

Monsters, Inc. is one of the best films in Pixar’s roster (my personal favorite, in fact). The voice work from Goodman and Crystal (who actually recorded lines together, a rarity in the voice work business) is phenomenal. The animation here is top notch for its time and still looks pretty good for being over thirteen years old. The pacing on the film is another major take-away. It never misses a beat.

Even the musical score just stays with you; this whole film does.

Enjoy watching this film if you haven’t already seen it; it plays with the mythos as well as pulling at the right heart strings, and it pours a couple dashes of The China Syndrome in for good measure.

Take a moment to enjoy some of the little in-jokes that Monsters, Inc. has to offer. Notice that Randall Boggs threatens to throw someone into a wood chipper (a fate he isn’t all too unfamiliar with himself from his work with the Coen brothers). Laugh at Mike’s chair during the employee theatrical performance of “Put That Thing Back Where It Came From or So Help Me” (it happens to resemble one Krang’s chair from the Teenage Mutant Ninja Turtles cartoon).

The best little homage in-joke comes from the restaurant Harryhausen’s, which takes its name from Ray Harryhausen, famous stop-motion creature maker known for Clash of the Titans and Jason and the Argonauts. Also, when Harryhausen made the film It Came from Beneath the Sea, he only had the budget for a six-tentacled octopus, which appears as a chef in the restaurant named for him in Monsters, Inc. Isn’t learning fun?

Also, wait around during the credits for a list of Production Babies (a staple for Pixar, covering all the children born during production) and a notice proclaiming “No Monsters Were Harmed During the Making of this Film.”

What a terrific film, I was so excited to revisit it for the 31 Days of Horror and I hope you will view it yourself, either for the first time or the 1000th.