I was blessed earlier this week with the opportunity to see Solo: A Star Wars Story before its initial release. I cannot express in words the feelings I had sitting in a theater with my best friend and taking in the experience. I’ll get to it another time.

Solo has had a long and difficult journey to get to the big screen. After original directors Phil Lord and Chris Miller were let go from the project, seasoned director Ron Howard (Frost/Nixon, Inferno) stepped in to complete filming. By that, I mean to reshoot most of the film. So after all this, and making its May 25th release date, is Solo a worthy addition to the Star Wars franchise?

The film picks up about ten years before we meet the titular smuggler in A New Hope and witnesses the major events in his life leading up to that point, from his joining up with Wookie Chewbacca (Joonas Suotomo) to his initial interactions with con artist Lando Calrissian (Donald Glover, Spider-Man: Homecoming, TV’s Atlanta). Han (Alden Ehrenreich, Hail, Caesar!, Rules Don’t Apply) struggles between making the right choices and the smart choices, and he finds that the good in him is capable of outweighing the bad.

So, there’s still a lot of spoilery territory with Solo, so I’ll tread as best as I can. First of all, I can say that this film is not an improv-heavy comedy. It’s probably the funniest Star Wars film in some time, but it never hinges too heavily on it.

The best sequences in the film rely on the relationship built between Han, Chewie, and Lando, and thankfully these three performers steal the film. There was a lot of talk about Ehrenreich’s performance and his need for an acting coach, but the final product was some solid work from the actor. I have to imagine there is a great deal of stress in taking on the mantle of a character from four previous films and dozens of books and comics, and I’m sure it was difficult to switch director’s and styles as much as I’m sure he had to, but I thought he did quite well in the role, never falling into Harrison Ford impressions. 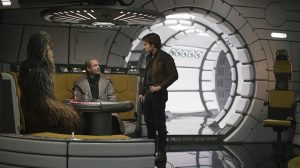 Joonas Suotomo has had some practice as Chewie from the past couple Star Wars installments, and he provides Chewbacca with youthful charisma that meets, but never passes, Peter Mayhew. Donald Glover is excellent as Lando, again never falling into caricature, but driving his own path that makes for some truly smarmy work from Glover.

The supporting cast is admirable as well, with specific love given to Woody Harrelson (Three Billboards Outside Ebbing, Missouri, TV’s True Detective) as Beckett, Han’s mentor. The scenes he shares with Val (Thandie Newton, Crash, TV’s Westworld) are tender and joyful. There is also an interesting parallel to the relationship between  master and apprentice in both Jedi and Sith lores.

I also want to touch on the score. While I enjoyed the previous non-Williams score from Rogue One, Solo’s score from John Powell is fantastic and thrilling and feels more like it is a part of Star Wars. John Williams crafted the Han Solo theme and then handed off duties to Powell, and the partnership created something truly special.

Solo is not without its faults, however, and the issues with the film are particularly glaring when they happen. First, the film has some serious pacing issues. This is an issue Ron Howard’s films tend to have. It just feels like it went on far too long and when I thought the finale was coming, it didn’t.

There’s also a checklist feeling to the film. One thing I really enjoyed about Rogue One was that they took a sentence, a mere moment, of the lore and expanded it for a film. Solo instead chooses to hit every major Han Solo milestone in one film, and it feels like someone at Lucasfilm has a checklist and is checking items off as they happen in the film:

“Oh, he has to meet this character.”

“Oh, we have to explain this throwaway line.”

The film suffers from it, and they should have just picked one major event or relationship from his life to dive into. I disagree with reviewers saying this adds nothing new to the franchise, but I can also kind of understand what they mean.

Finally, there’s a scene at the end, when you see it, you’ll know which one I mean, where the film takes a major turn down a different path and it feels both forced and confusing, and while I, a major Star Wars fan, get it, I feel like casual fans won’t. Not that they can’t understand it, but it felt very out of place. While I won’t divulge this scene, but you will definitely know what I’m talking about.

Solo: A Star Wars Story is a thrilling adventure, one that I quite enjoyed. While it feels like a missed opportunity to do something more unique, and I still can’t claim that we needed this film, it was a nice pallet cleanser for the serious tone of The Last Jedi. There are some fine performances and some really cool sequences, the film still feels like it’s trying too hard to do too much. That being said, I cannot wait to see it again.

For my review of George Lucas’s Star Wars: Episode I – The Phantom Menace, click here.

For my review of George Lucas’s Star Wars: Episode II – Attack of the Clones, click here.

For my review of George Lucas’s Star Wars: Episode III – Revenge of the Sith, click here.

For my review of Richard Marquand’s Star Wars: Episode VI – Return of the Jedi, click here.

Since I’ve already seen one of 2018’s releases, I’m probably a little late on presenting my most anticipated list for 2018. Don’t worry, it hasn’t changed much. Let’s start off with a note:

NOTE: THIS IS NOT A COUNTDOWN BUT A LIST.

-I thoroughly enjoyed director Alex Garland’s Ex Machina from 2015, and on that film alone, I cannot wait to see Annihilation. Garland has had a run of pretty solid work in the last few years, and getting top talent like Natalie Portman and Oscar Isaac involved is only making this more hyped for me. I don’t know much about the film’s plot outside of the lone trailer I’ve seen, but getting a chance to see a great storytelling weave a yarn in his own sandbox is always a great thing.

-I’m very sad that Guillermo del Toro isn’t returning to helm the sequel to his underappreciated Pacific Rim, but that’s what it took to get The Shape of Water, so what can you do? At least he is staying on in a producer role and the franchise is continuing. I’m not sure how to feel about Uprising as the film looks drastically different from the original, but John Boyega playing Idris Elba’s son looks interesting enough, and genre favorite Steven S. DeKnight behind the camera is setting the film up for success. I’m very excited to see an expanding of this mythology and more Jaeger/Kaiju action.

-I’m just starting the book right now, and the trailers for Steven Spielberg’s Ready Player One have been fascinating. I just don’t know how to feel but the film looks bonkers. There is absolutely no reason not to be excited for more Spielberg but this one feels so familiar and yet so different from what we’ve seen recently from the director. As long as there are enough weird Easter Eggs, I guess I will keep plenty busy at this one.

-Yeah, this one was on my list for 2017, but it got bumped back. God Particle is all but confirmed to be the next Cloververse film after Cloverfield and 10 Cloverfield Lane. Since I loved both of its predecessors and I enjoy dissecting theories about this quasi-anthology, God Particle should be a fun and interesting ride.

-What do I say that hasn’t already been said? Almost 20 films in and we are getting this massive film. I have no words. I doubted that this franchise could or would work, and I was wrong. Pop in Black Panther and Ant-Man & the Wasp (I didn’t want to have more than one franchise installment on this list but I’m stoked for all three) and this should prove to be another exciting year for the MCU. 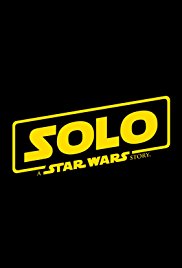 -All the drama behind-the-scenes has made me rather nervous for Solo, but I trust the minds at Lucasfilm because I’ve enjoyed all three Star Wars adventures since their acquisition by Disney, so I trust that they acted at the right time installing Ron Howard as the new director to fix this anthology film. What does make me nervous, though, is the lack of the trailer with only four months to go.

-I elected to pick Deadpool 2 over The New Mutants and Dark Phoenix because of how surprising the original Deadpool was in 2016. With the shuffling around behind the camera, the exit of Tim Miller, and the addition of David Leitch, it is interesting to see how this one plays out. If the teaser or short that were released are any indication, I think we are in good hands here.

-Trust me when I say that all of my excitement for this film is riding on Shane Black. I always love a new Predator film, but Shane Black is the reason this is on the list. I love Black’s storytelling sensibilities from his writing of the greatest action film of all time (yeah, I’m calling it for Lethal Weapon) but also his work as a director with Kiss Kiss Bang Bang, Iron Man 3, and The Nice Guys. Some people aren’t aware that Black even co-starred in the original Predator, so he has a good tie to this series.

Fantastic Beasts: The Crimes of Grindelwald

–Fantastic Beasts and Where to Find Them was quite a surprise. I love Harry Potter, but the idea to expand the mythology with an adaptation of a textbook was weird. Turns out, J.K. Rowling has a few more stories to tell. The flaw with the first film, though, was Johnny Depp’s cameo as Gellert Grindelwald. I didn’t like his appearance and I don’t have as much faith in him as an actor, so seeing him take on the second-biggest villain in the Harry Potter universe was an odd choice. With The Crimes of Grindelwald, Depp will be taking on a much larger role, so I’m interesting if a little nervous to see what comes of it.

-Though the trailer didn’t have much to offer (as the film is still about a year out), seeing Peter Jackson’s name onscreen again is always a welcome sight. He’s taking on a producer and screenwriter role this time with Mortal Engines, an adaptation of the novel series by Philip Reeve. Jackson and his team are incredible writers, so a nice foundation to this film is enough to spark my interest. We will have to wait for another trailer to see how it is all shaping up, but Mortal Engines has a lot on its plate.

So there it is. What film are you most excited for in 2018? Let me know/drop a comment below.