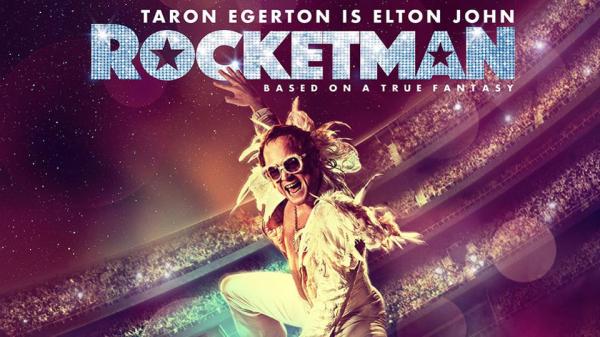 121 mins. Rated R for language throughout, some drug use and sexual content.

It’s about damn time we got an Elton John biopic, and boy was this one worth the wait. 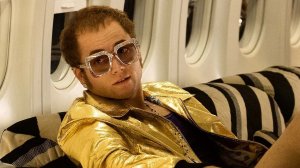 Elton John (Taron Egerton, Kingsman: The Secret Service, Sing), in classic biopic form, needs to go to rehab, and while he’s there, he recounts all the moves in his life that led him to this place, from his friendship with songwriter Bernie Taupin (Jamie Bell, Billy Elliot, The Adventures of Tintin) to his explosive working relationship with music manager John Reid (Richard Madden, Ibiza, TV’s Game of Thrones). In his recollection, Elton begins to see that the biggest obstacle in his happiness might just be the reflection in the mirror.

Rocketman might just be the best musical biopic I’ve seen in a long time, and perhaps the best one, though I’m speaking as someone who thoroughly enjoyed it and just saw it. Director Dexter Fletcher (Eddie the Eagle, Sunshine on Leith) has seemingly craft a film that is equal parts musical extravagance and true life biopic storytelling. The events are somewhat incorrectly placed on a timeline, but it is done in the service of the character and the story, and I didn’t mind. What Fletcher does so well in this film and in previous work is that he has such a flair for making his style its own character without sacrificing the story and characters. His style has the similar effect as what Quentin Tarantino does with his musical choices. He uses them to aid his characters. If he has a flaw in the film (and it’s really only a nit-pick), it’s that he goes full classic biopic by having the main character recount his entire life in rehab, a move that almost feels cliché now, but I brushed past it.

Taron Egerton is on fire here. It’s his best performance of a small but impressive career. He owns the screen in every scene, aided by John’s impressive wardrobe (someone start talking Best Costume Design here), but it is his performance, a richly-layered look at Elton John on the inside and outside, that is the biggest takeaway from the film. He blends into Fletcher’s visual storytelling so well, and the chemistry between him and the supporting players is astounding. Then there’s the singing (Egerton does his own in the film), which, although not sounding exactly like Elton John, aids the character he is playing and has a real feeling to it that doesn’t feel like he’s just trying to match someone else. I’d rather have it this way.

The supporting cast does a great job when not overshadowed by the grandiose nature of Elton John. I really like Jamie Bell and it is great to see him get some impressive moments to shine in conversations with Egerton. Richard Madden needs to be in more movies after work in Game of Thrones and Bodyguard, and he plays John Reid in such a menacing and cruel way that works well without seeming completely mustache-twiddlingly villainous. Bryce Dallas Howard (Jurassic World, A Dog’s Way Home) appears in the film in a physical transformation as Elton’s mother Sheila, and it’s some of her best work as well. Dexter Fletcher has a knack for collaborating and getting the absolute best from his actors, and it’s on full display here.

Rocketman has become my favorite film so far this year. It’s an impressive feat that showcases why filmmakers like Dexter Fletcher need to be getting more work, and it is a great standout performance from Egerton. See this one as soon as you can. This is one film we’ll be talking about for some time.

111 mins. Rated PG-13 for some thematic elements and language.

Director Stephen Frears (The Queen, Florence Foster Jenkins) seems to surprise me with his films. He has regularly directed films that, on the surface, seem very boring, but when I see them, I’m often shocked at how much I’ve enjoyed them. Victoria & Abdul is another such film that seemed rather boring from what I’ve seen. But did the finished film actually work?

Victoria & Abdul is the story of a friendship between an aging Queen Victoria (Judi Dench, Notes on a Scandal, Murder on the Orient Express) and her Indian Muslim servant Abdul Karim (Ali Fazal, Furious 7, Fukrey Returns). This friendship is resented by son Bertie (Eddie Izzard, Ocean’s Thirteen, The LEGO Batman Movie) and others in England, who devise several plots to get rid of Abdul and send him back to India.

Frears’s new film suffers from the same issue that some of his previous films have: their pacing. Victoria & Abdul should’ve been tightened down by cutting around 20 minutes from the film. There is a sizable chunk in the middle that doesn’t develop either character and also doesn’t advance the narrative.

What saves the film is the central relationship between Queen Victoria & Abdul Karim. It is the scenes with these two that are so spectacularly well-acted that it makes the entire viewing experience all the more enjoyable. Dench and Fazal put in some of the best performances of 2017, hands down, and their chemistry is terrific.

On the other side of that coin, I didn’t find the supporting “antagonists” of the film to be very well-written. I didn’t really understand their motives outside of them just being mad or jealous. It just didn’t work for me and I didn’t find them interesting or compelling enough to support the narrative’s driving force.

Victoria & Abdul showcases its two leads and their central relationship, and while the “villains” were less than stellar and Frears still hasn’t solved his pacing issues, Dench and Fazal have so much infectious chemistry that it still makes the film worth it. The technical merits of the film are finely-tuned here and the story is a very enjoyable character piece. Check this one out.

For my review of Stephen Frears’s Philomena, click here.