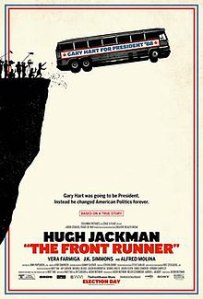 113 mins. Rated R for language including some sexual references.

If you’re planning on making a political drama, ensure that it helps to shine a light on our current political system. The Front Runner does just that.

After a failed 1984 attempt at making the ballot, Gary Hart (Hugh Jackman, Les Miserables, The Greatest Showman) is making waves in 1988 as the front runner to the presidency. Everything seems to be falling perfectly in place for Hart, until reporters from The Miami Herald unveil an affair between Hart and a young woman who isn’t his wife. Now, Hart needs to save his political future without destroying his marriage to wife Lee (Vera Farmiga, The Departed, The Commuter). His campaign manager Bill Dixon (J.K. Simmons, Whiplash, Father Figures) truly believes that Hart is the savior our government needs, but he finds that he faces a mountain of problems in righting the ship for Hart, who struggles with the notion that his free time and life outside of the office is nobody’s business but his own.

There are several award-worthy performances in The Front Runner, most notably Jackman’s. It becomes difficult at times to even think of Jackman in the role. His work as Hart is so strong and well-built as he plays the flawed potential-President. His exchanges with Farmiga are incredible, and she is wonderful as Lee Hart, a wife who understands the toll of being married to one of the most talked about men in America. Her only ask? That he not embarrass her. She gets more than she bargained for. Lastly, J.K. Simmons is a revelation as Dixon, a man who knows the state of the game and is aware of it changing right in front of him.

The Front Runner has some gorgeous visuals and it convinced me that I was in 1988 experiencing all of this for the first time. Director Jason Reitman (Up in the Air, Tully) has such an incredible color palette on the screen for his audience, and it makes all the drama unfolding onscreen really POP.

The biggest flaws with the narrative is the bloated nature and some of the extra fat on the story. I didn’t need the subplot with Donna Rice and Irene Kelly (Molly Ephraim, Parked, TV’s Last Man Standing). It’s important information for its own story, but I didn’t feel like it mattered to Gary’s journey. There’s also a lot of time spent with Lee and daughter Andrea (Kaitlyn Dever, Detroit, TV’s Justified) at the house holed up hiding from reporters. Again, it doesn’t do much to Gary’s journey. Interesting though it may be, I was following Jackman’s character. Trim some of the excess from the film and it will streamline the pacing so much more. 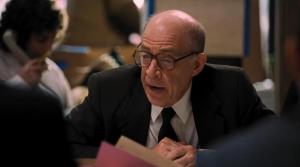 The Front Runner is quite fascinating in the current political climate. If Hart had run today, would he have won? If he hadn’t been caught, how would the world be different? It raises a lot of questions, and director Reitman puts all the pieces in play and lets them dance around. Exactly what the statement he’s trying to make is somewhat muddled, but performances and visual flair can say quite a lot. The Front Runner will likely be snubbed for a lot of potential Oscar wins as the season goes on, but it’s worth your time when it opens on Election Day. Just make sure to vote first. 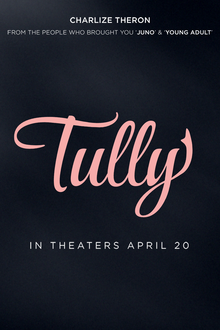 I love Jason Reitman. I think he is an incredibly underrated talent. I enjoyed Juno, which he directed based on a screenplay from Diablo Cody. I also enjoyed, although to a lesser extent, Young Adult, a difficult dark comedy that brought in Charlize Theron, and I’m more than a little intrigued by his newest film Tully. A teaser trailer dropped today.

The film is marketing itself as a story about motherhood in 2018, and it seems like an interesting combination of drama and dark wit, something both Reitman and Cody excel at, and while I didn’t laugh at all during the trailer, that isn’t to say that the movie won’t be funny. I just think I need more than a teaser to completely sway me. In fact, Tully, the titular night nanny, isn’t even introduced until the end of the teaser, so all things considered, I need more to go one here.

Am I excited? Moderately. I wasn’t entirely aware of this film’s existence until today, but knowing these three are back again, and that we will hopefully see another comedic turn from the wonderful Ron Livingston is always cause for excitement.

Are you excited for Tully? What did you think of the teaser trailer? Let me know/Drop a comment below.