When I heard that Academy Award nominated director Darren Aronofsky (Black Swan) would be taking on the biblical tale of Noah, I knew two things. One: this film was going to divide audiences and potentially upset a lot of people. Two: I knew I had to see it. I knew the director, who also directed such genre-busting films as Requiem for a Dream and The Fountain, was going to have a specific view of the source material and he was going to create a unique vision that we hadn’t seen before. He did.

The film is the story of Noah (Oscar-winner Russell Crowe, Gladiator) and his family, including wife Naameh (Oscar-winner Jennifer Connelly, A Beautiful Mind), adoptive daughter Ila (Emma Watson, Harry Potter and the Deathly Hallows: Part 1, This is the End), and son Ham (Logan Lerman, The Perks of Being a Wallflower, Percy Jackson: Sea of Monsters). Noah receives a message from The Creator and then further proof of his destined path from The Watchers, a group of rocklike creatures with unimaginable strength of body and mind. He begins work on an ark after receiving further guidance from his grandfather Methuselah (Oscar-winner Anthony Hopkins, The Silence of the Lambs). As the ark is constructed, it attracts some unwanted attention from Tubal-Cain (Ray Winstone, The Departed, Snow White and the Huntsman) and his group, who want the ark for themselves.

The special effects work from ILM is astounding here. They created slightly tweaked versions of animals along the evolutionary line. They also created The Watchers, a very interesting addition to this tale. They appear to be fallen Seraphim angels, who had six wings. That would explain why the creatures have six limbs.

I also happened to find the film’s ambiguous time period both confusing and interesting. It could be in the past, and it could be in the future. It turns the whole tale into a kind of cautionary tale about the direction mankind may be heading.

Russell Crowe gives one of the most powerful performances of his career as Noah, and he and Connelly’s chemistry is strong given this as the second film they have appeared in as romantically-linked characters.

I completely got why the film would be controversial. Any time you have an adaptation of a biblical tale, you have controversy. This film harkens back to the controversy behind Scorsese’s The Last Temptation of Christ, or even Ron Howard’s The DaVinci Code. So many parts of this film are so anti-biblical in their biblical portrayal. Crowe’s version of Noah as an angry, alcoholic, and unyielding servant to his creator is bound to spark arguments. Paramount Pictures had to actually create a disclaimer for the film stating that liberties were taken. Honestly, how could they not be? The entire story of Noah takes up all of two chapters of the bible. Not a lot of detail.

This is the point where I make a stand. People, it’s a movie. It isn’t some antichrist-made archaic devil-worshiping creation. It is a movie. So calm down. None of the stuff in this movie is all that far off. Yes, Aronofsky’s Noah suffers from survivor’s guilt. His Noah has evolution in it. His Noah had fallen angels and darkness and suffering. His Noah is some of the saddest and also inspiring work I’ve seen. It actually changed the way I see the story, and not in a bad way. It is an interpretation, and if you didn’t like it, I’m sorry, but Aronofsky wasn’t making a film to appease the masses. He was making a story the way he saw it. Everybody needs to take a chill pill. 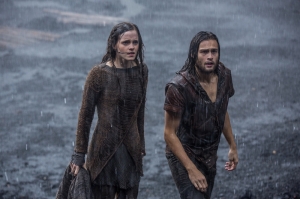 I’m a Christian and I liked Noah. That’s all I feel I need to say. I thought it was one of the best films I have ever seen. When I finished it the first, I felt like I needed to see it again immediately. The only flaw, if it is one, is that it is a much more simple story than Aronofsky’s other work with Requiem for a Dream, Black Swan, and The Fountain. Go see this movie. I can’t say that you will love it like I did, but I feel like it needs to be seen, no matter if you have religious background or not.

So what did you think of Darren Aronofsky’s Noah? Did it sink or swim? Let me know!