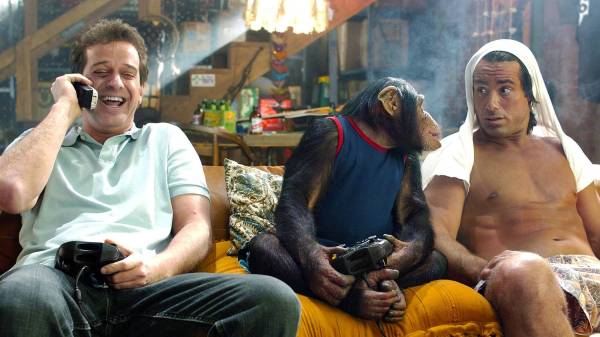 94 mins. Rated R for drug use and language throughout, strong crude and sexual humor, and nudity.

Hey, it’s April 20th, and we could all use a laugh right about now, so in honor of this most blessed day, let’s take a look at Grandma’s Boy, the 2006 stoner comedy from Happy Madison that kind of went unnoticed upon first release only to resurface a few years later as a dumb piece of pop culture. I remember hating the film on first release, so let’s see how we are sitting on the film today.

Alex (Allen Covert, 50 First Dates, Murder Mystery) is a stoner video game tester who’s just been booted from his apartment. With nowhere to go, Alex moves in with his grandmother Lilly (Doris Roberts, Christmas Vacation, TV’s Everybody Loves Raymond) and her two friends. Alex doesn’t want his friends to know he’s living with his grandmother, so he starts lying about his three crazy wild roommates, and it works…until the lie is undone.

I wasn’t lying when I said this film went unnoticed. It only grossed about $6 million in its theatrical run but went on to bring in $50 million in home video sales. Why was it popular? Perhaps because it’s so damn stupid. No, that’s not exactly a criticism. The first priority of a comedy is to entertain and make you laugh or, at the very least, smile. In a stoner comedy, those moments are usually derived from stupidity, and yes, there is stupidity abound, and some of it really works. Then, there are chunks of the film that do not. Let’s talk about the parts that worked for me first.

I felt that Linda Cardellini (Scooby-Doo, Avengers: Endgame) was great as Samantha, Alex’s new “boss” who has been sent to oversee final touches of Eternal Death Slayer 3, the video game Alex and his coworkers are working on. The overall character arc conceived for her is terrible, but she makes the most of it and is a fun presence onscreen.

I also really enjoyed Peter Dante (The Waterboy, Grown Ups 2) as Dante, the stereotypical stoner drug dealer who tries to buy a tiger in the movie. That’s pretty much all he does in the film, but everything that comes out of his mouth is hilarious. Same thing with Nick Swardson (The Benchwarmers, Airplane Mode), who plays Jeff, Alex’s very childish friend. Swardson can’t really lead a film, but he works really well in a supporting role. Even Doris Roberts, who is very funny in the film playing a similar character to others but in a completely whacko movie.

But none of that, absolutely none of it, matters if the film isn’t funny. Thankfully, the guffaw laughs are far more prevalent than the eye rolls. Yes, there are a few eye rolls, but some truly funny lines, scenes, and characters exist within the frames of Grandma’s Boy. Without a doubt, this one is very funny.

So there you have it. It’s 420, and now is probably the best time to watch this stoner comedy. Yes, it’s really dumb and some of it is nonsensical and they completely waste Jonah Hill early on in his career, but it is undeniably funny for a number of scenes, and while it may not work for everyone, it will work well for its demographic.