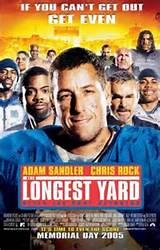 I think The Longest Yard was an interesting choice for a remake. Technically, my rule on remakes is that one should remake a film if it has faded into obscurity or not succeeded in making a noteworthy film to begin with. I know that the original film The Longest Yard was somewhat successful upon first release, but by 2005, it wasn’t a talked about film.

The Longest Yard is the story of Paul Crewe (Adam Sandler, Grown Ups, The Cobbler), a washed-up ex-professional football player who has just been imprisoned. There, he is offered the chance to earn some brownie points and possible early parole by Warden Hazen (James Cromwell, The Green Mile, Big Hero 6). All he has to do is recruit a team of convicts to play a game of football against the guards. Paul makes nice with Caretaker (Chris Rock, Head of State, Top Five) and an older coach, Nate Scarborough (Burt Reynolds, Boogie Nights, Delgo) and proceeds to turn a rough-hewn group of criminals into a well-oiled footballing machine in this remake from Peter Segal (50 First Dates, Grudge Match).

The biggest fault of The Longest Yard is the aging process for an Adam Sandler movie. Adam Sandler’s films, with a few notable exceptions, do not age like a fine wine, but rather an open beer bottle. The jokes become less enjoyable as time goes on, and they start to turn from funny to annoying. There are still some hits that work, but ultimately, I groaned more than giggled. I surprisingly enjoyed Chris Rock’s performance as Caretaker, and unsurprisingly I had fun watching James Cromwell and Burt Reynolds let loose.

Peter Segal isn’t the kind of director to thrill, but I thought he handled the action scenes during the football game pretty well. Ultimately, however, the film felt tame, having a lot less grit than its predecessor. I found it enjoyable enough for one viewing, but after another ten years, I don’t think I could do it again.