125 mins. Rated R for violence and language throughout.

Triple Frontier seemed like a movie that was never going to get made. Cursed, almost. Over the past few years, I’d heard reports of all sorts of actors from Johnny Depp to Tom Hanks board the project and then back out. Some actors, like star Ben Affleck (Argo, Justice League) joined the film only to back out over scheduling conflict and then come back and join the cast once again later on. Kathryn Bigelow was set to direct but then left to direct Detroit. It seemed to wallow away in development hell until finally J.C. Chandor (A Most Violent Year, All is Lost) put all the pieces together, with a script from Mark Boal and Chandor, and delivered Triple Frontier, and it turned out to be an intense thought-provoking thrill ride.

Santiago (Oscar Isaac, Ex Machina, Star Wars: The Last Jedi) assembles a crew of his friends and ex-Special Forces members to steal from and assassinate a dangerous drug king in South America. When the heist takes a surprising turn and the escape plan changes, their loyalties to the mission and to each other are tested. They are forced to decide between risking their greed or their survival as obstacles mount all around them.

Triple Frontier’s tense screenplay works with the Hero’s Journey really nice, and Isaac’s Santiago, for better or worse, works his way toward a goal, and his decisions have consequences. Affleck’s Tom is a man who needs the money but knows what this kind of mission can do to him. The two play opposite sides of the coin and as their moralities change between them, they play great foils to one another.

Charlie Hunnam (A Million Little Pieces, TV’s Sons of Anarchy) plays William, a public speaker struggling with his mental state after what he’s witnessed. He takes on the job once he knows Tom is involved because he knows Tom’s clear head will prevail. His is a character of habits and little comforts who plays by the book. 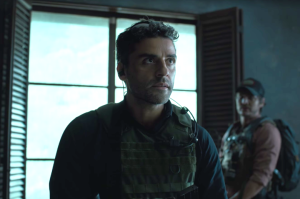 Pedro Pascal (Kingsman: The Golden Circle, If Beale Street Could Talk) is Francisco, a hell of a pilot with a little drug problem. He wants to get in the air again and feel a sense of purpose. These four characters are written as people who don’t break the rules, but the circumstances of the plot and narrative fundamentally change their thought processes, and with that comes mistakes and a sense of moral ambiguity.

That being said, I felt like Garrett Hedlund (Mudbound, Burden) was wasted in this film. His character, William’s brother Ben, doesn’t have all that much to do. He isn’t given a compelling narrative and seemingly fills out the cast.

Triple Frontier has a vivid and gorgeous cinematic look to it. The cinematography is clean and colorful, the editing quick and tight, and the production design realistic. There’s some issues with the sound design in the film, though, and the music choices sometimes feel like a checklist for drug cartel movies, but the film’s most impressive aspect is its use of tension. There are a great many scenes where the wills and resilience of the crew are tested, and thanks to Chandor’s decision to stretch the tension from an already tense script work wonders here. I was pulling my hair wondering just how they were going to escape from several situations.

Triple Frontier hits Netflix screens on March 13th, but you can catch it in theaters before that, and I would suggest it. This is a tense morality play with some intense action, solid character development, and some genuinely shocking moments. I recommend seeing it immediately. 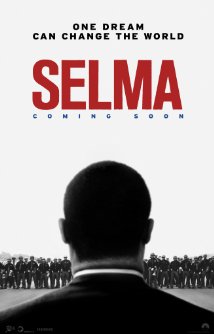 Selma is the story of a key moment in the life of Martin Luther King, Jr (David Oyelowo, Interstellar, A Most Violent Year): the fight for the right to vote. King has tries to get help from President Lyndon B. Johnson (Tom Wilkinson, Batman Begins, The Grand Budapest Hotel), but to no avail. His wife, Coretta (Carmen Ejogo, TV’s Zero Hour, The Purge: Anarchy), would hope to keep him out of harm’s way. But in Selma, Alabama, a woman named Annie Lee Cooper (Oprah Winfrey, The Color Purple, The Butler) can’t even get registered to vote. King takes his civil rights movement to Selma in hopes of swaying Governor George Wallace (Tim Roth, TV’s Lie to Me, Pulp Fiction) to let them vote. 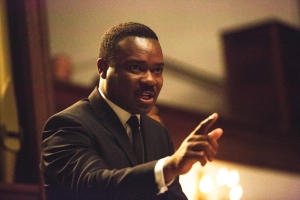 While the film Selma isn’t perfect, it does contain some of the more perfect casting and performance work of the past year. David Oyelowo is the spitting visage of the late Dr. King. He has the look, he has the voice, and he has the mannerisms down to a science. Tom Wilkinson plays the former President filled with self-doubt and delusion. Rapper Common (TV’s Hell on Wheels, Smokin’ Aces) gives one of his best roles as James Bevel, as does Wendell Pierce (TV’s The Wire, Parker) in the position of Reverand Hosea Williams. We also get some great turns from some major Hollywood players, like Martin Sheen and Dylan Baker (Spider-Man 2, Anchorman 2: The Legend Continues), in small roles to elevate the craft of the other actors to something truly great.

Director Ava DuVernay’s camera is more stoic than static, offering what feels more like a live docu-drama than a sweeping picture, but that isn’t necessarily a bad thing, but it did mess with the flow slightly.

I really enjoyed the song “Glory” from Common and John Legend that plays over the closing credits. It displays a plethora of African-American cultural music from the time of Dr. King to present day. 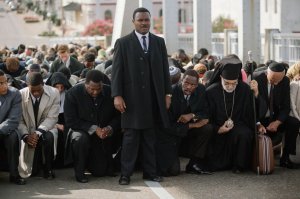 Ava DuVernay’s Selma is a film that must be watched, if only for the powerful messages it conveys. I honestly did not know as much about this facet of the Civil Rights Movement, in particular the events in Selma, Alabama, and so I found the film engaging and shocking at times, and definitely worth your time. 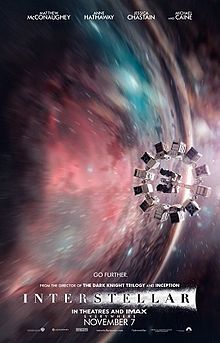 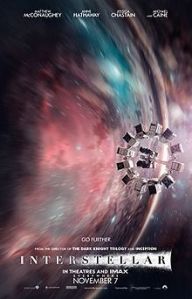 Just give me one more minute so I can calm down, then we can discuss this movie.

Interstellar. Wow. A film that needs to be seen once and then most likely again right after. This movie just took my breath away.

The world is dying. The last of the renewable food sources is almost depleted and engineer Cooper (Matthew McConaughey, TV’s True Detective, Dallas Buyers Club) is on his way through a black hole with a crew of scientists to find a new planet capable of sustaining human life. I don’t want to give away too much here, because this film requires you to be a participant in it.

The plot here is one that pulls you in and keeps you there the entirety of the film. The screenplay from director Christopher Nolan (The Dark Knight, Inception) and his brother Jonathan is just incredible, presenting ideas that are grounded in real science and also contribute to a grander understanding of the universe.

McConaughey’s Cooper is an incredibly faceted character, one that could only be played by the Academy Award winner. He is a man who is forced to make decisions that cause him and his family pain in order to save the human race, and he is not without his pain. It is as though he is constantly suffering from survivor’s guilt in a way similar to Russell Crowe’s performance in 2014’s Noah.

Anne Hathaway (Les Miserables, Rio 2) gives a tormented performance as Brand, a woman who is emotionally just as weak as Cooper but chooses not to see it as a connection between the two. These two are both willing to give up great happiness in the goal of the mission, and they both pay dearly for the sacrifices.

Jessica Chastain (Zero Dark Thirty, A Most Violent Year) and Ellen Burstyn (Requiem for a Dream, Draft Day) add to the strength of this cast, but the real surprise here is TARS (voiced by Bill Irwin, How the Grinch Stole Christmas, Rachel Getting Married), an artificial intelligence assisting Cooper and Brand in their mission. TARS is a unique robot reminiscent of HAL 9000 from 2001: A Space Odyssey. In fact, a lot of this film pays homage to Kubrick’s masterpiece. TARS provides comic relief while being a fascinating creature in this world created by Nolan.

The cinematography is spectacular here, and presents a quiet and lonely universe, one where the only friend you have is the mission. It is a quiet empty space with beautiful visuals that deeply sadden the viewers while maintaining a bit of wonder.

The score is equal parts quiet and enveloping. Completely engrossing and altogether despressing.

Just a note on visual effects. It’s winning the Oscar, just prepare for it.

Interstellar is one of the best films ever made. It is one of the best films out this year and I will be looking for it on the list of Best Picture nominees. Not only does it present a dismal future but also a hopeful future, and it comes down to a beautifully realized and wholly engaging story with incredible performances and some terrific surprise cameos too. Watch this movie.

Have you seen Interstellar? What did you think? Did you find a hit through the black hole or a extinction of film? Let me know!